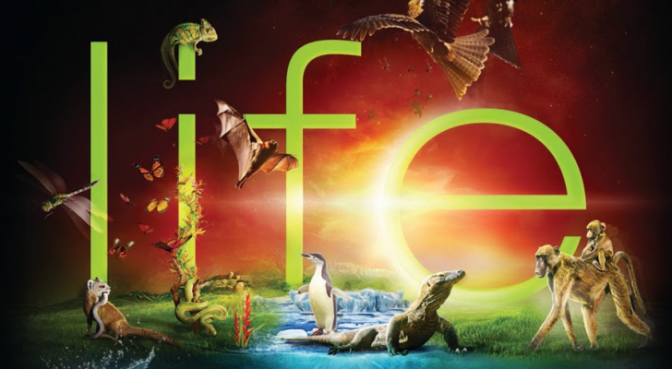 Documentaries hold a power unique to any other type of film.

They have the remarkable capacity to shift our understanding of the vast and complex world in which we live, most of the time presenting us with powerfully relevant information, a previously unknown perspective, and hopefully, a new choice to make a difference.

The following list of documentaries showcases films that may inspire a new outlook on the world we live in. There were so many to choose from that compiling this list proved challenging, however, each one of these films stands as prudent commentaries offering valuable insight into the wonders and workings of the world at large. Enjoy!

A vast majority of people live their lives exiled from the wonders of nature and the myriad of living creatures that inhabit our incredibly diverse biosphere. Not to worry, however, as this wonder is magnificently captured in the 2009 BBC mini-series, Life.

Shot in crystal clear high-definition and narrated by the world’s most beloved narrator himself, David Attenborough, the series chronicles some of the most unusual, if not downright bizarre, behaviors that living organisms have devised to keep their species alive. The massive project took 4 years to shoot and put together, taking brave camera crews across every continent and habitat imaginable. Get your popcorn ready and prepare for your mind to be blown.

Commonly pegged as the films that ignited a global awakening, the Zeitgeist Trilogy quickly opened a public discourse into the largest “conspiracies” to brace the modern day world. Narrated by the enigmatic filmmaker and social activist, Peter Joseph, the film audaciously exposes the high-ordered corruption in all aspects of finance, religion, and politics today, inspiring the masses to open their eyes to the the inner workings of the global tyranny ruling our world. The series leaves the viewer with a whetted appetite for more, making this documentary film series a can of worms only for the brave and ready.

By now, we have undoubtedly heard about the horrendous ongoing conflict in Egypt through the mainstream lens, but rarely have we gotten the chance to see an inside perspective from the men, women and children who are actually experiencing the carnage and chaos. The 2013 documentary, The Square, does just this. Audiences get a compelling inside look at the cascading series of revolutions and counter-revolutions that have shaken Egypt since the beginning of 2011, shattering routine bias commonly imposed by the mainstream media. We see the humanness of the Egyptian conflict like never before, a frightening reality that reminds us of the possibilities any country could experience in the face of governmental defiance.

Known for his clever knack for ridiculous humour, filmmaker Tom Shadyac’s resume of films include blockbuster hits like The Nutty Professor, Ace Ventura: Pet Detective, and Bruce Almighty. But after a 2007 biking accident left him with a series of insistent headaches and a painful sensitivity to light, Tom was forced to spend a 6-month period bed-ridden, in complete darkness.

Once Tom recovered, he found himself with a new perspective and a slew of burning questions about life. This prompted his journey into the realm of documentary film-making, spawning the film I Am. The film asks two central questions: “What’s Wrong With the World?” and “What Can We Do About it?”, picking the brains of a cast of intriguing and insightful public figures. The themes explored in I Am make important food for thought for everyone.

Samsara also made a previous list of life changing films we wrote about, seen here, due to its success in capturing the unfathomable reaches of humanity’s spirituality and the human experience. Neither a traditional documentary nor a travelogue, Samsara takes the form of a nonverbal, visionary inspired guided meditation. From the mundane to the extraordinary, prepare for a journey around the world like nothing you’ve seen before.

Coming in at number 5 is a film that changed my life only 20 minutes in. Earthlings is one of those films you cannot walk away from unaffected, exposing a reality so often swept under the rug by most. Some of the largest industries in our world today operate from the exploitation and slaughter of billions of animals annually, and this film exposes these gruesome and oft-ignored facets of society.

The film does well at showing how all living beings on this planet are ‘earthlings,’ and that somewhere along the way we’ve severed our connection to animals to a sadistic degree. If you are ready, watch this film and prepare for a massive wake-up call.

If there were ever a film to be considered the ‘must-see’ film of all global warming documentaries, Cowspiracy should undoubtedly top the list. The film explores the devastating impact of animal agriculture on the environment, and investigates the policies of large-scale environmental organizations on this issue.

Animal agriculture, i.e., beef livestock, is the number one cause of global warming, even surpassing carbon emissions. But the conspiracy comes into play when filmmakers make an even stranger discovery: hardly any person or organization knows about this statistic, and the ones that do are keeping an extremely tight seal on the information. Cowspiracy does a fantastic job at exposing the real inconvenient truth, and it directly involves you. A must-see indeed.

Life In A Day takes the number 3 spot for a few reasons. The first reason is due to it’s incredibly original concept – an arranged series of video clips selected from 80,000 clips submitted to YouTube, the clips showing respective occurrences from around the world on a single day, July 24, 2010. The second reason is due to the sheer magnitude and global perspective it provides the audience with.

The film leaves you with a feeling of connected-ness, having seen the diversity and rawness of humanity and the windows into different lives, capturing moments humorous and sad, ordinary and momentous.

Revolution is an urgent call to action over the looming ecological collapse. It presents the idea that all of our actions are interconnected and that environmental degradation, species loss, ocean acidification, pollution, and scarcity of food and water are limiting, even reducing, the Earth’s ability to support humans.

What is particularly important about this film is the director’s passion to get this message across to our youth, the ones who will be left to deal with the mess of previous generation’s decisions. Revolution is a film that should no doubt be mandatory for high school and university students to watch, whence the future policy makers emerge, to hopefully one day make a difference.

What other documentary would you expect to take the top spot on our list other than BBC`s Planet Earth? The series is probably the most breath-taking visualization of our planet ever conceptualized.

Comprised of eleven episodes, each features a global overview of a different biome or habitat on Earth captured in stunning high-definition. Planet Earth comes in at number one for the sole reason that it gives us a truly epic perspective on the world we live in, and reminds us of how freaking awesome and sacred our planet truly is.

There are so many amazing documentary films that this list of 10 had to exclude, so please, share with us below some of your favourite documentaries that gave you a new perspective on the world we live in!