10 Of The Worst Food Ingredients To Never Eat Again 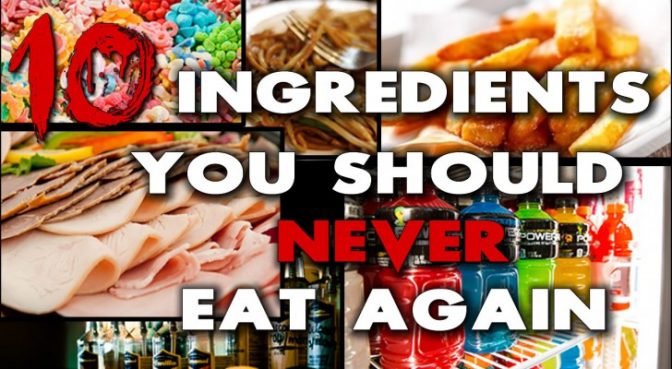 Ninety percent of the products we see on grocery store shelves today are loaded with processed and nutrition-less ingredients. The hard truth is that these ingredients are killing us one bite at a time. They are addictive and cunningly sleuth, usually masked by an array of creative but misleading advertising schemes.

However, there’s one amazing fact about our health that many of us forget from time to time. The fact is this- we all have 100% control over what we choose to put into our bodies! It’s a simple and empowering fact that we all need reminding of, and today is that day.

To help you take back your power and regain autonomy over your health, here is a list of the 10 worst food ingredients to never eat again to ensure your body is as toxin free as it should be.

What’s the deal?: A common food preservative that prevents the growth of mold and yeasts. When combined with vitamins C or E, it produces the carcinogen benzene. Sodium benzoate deprives our mitochondria (cellular energy-makers) of oxygen. It has also been linked to hyperactivity in children.

What’s the deal?: A preservative that prevents the breakdown of fats. The National Institute of Health states that BHT/BHA are “reasonably anticipated to be human carcinogens.” A natural replacement that does the same job in preserving food would be vitamin E, which you may see more of in the natural food section of your grocery store.

What’s the deal?: A flavour enhancer which is known to damage the appetite regulation center in the area of the brain known as the hypothalamus, causing leptin resistence and thereby eliminating the feeling of being “full.” It’s known as an excitotoxin, a chemical which overstimulates dopamine production, creating a drug-like ‘rush.’ MSG also promotes liver inflammation and dysplasia.

What’s the deal?: Used as a replacement for sugar, artificial sweeteners have recently been found to change the huge colony of bacteria in our intestines to favor the harmful bacteria that increase risk for diabetes and obesity.  A study also found that women drinking two diet sodas per day are 50 percent more likely to die from heart-related disease.

What’s the deal?: A food additive used in bread-making to soften and bleach the dough. Potassium bromate is banned in countries such as Canada, Brazil, and China because of it’s carcinogenic properties. It is particularly known to induce renal and thyroid cancer. Although most potassium bromate breaks down during the baking process, tests have confirmed that trace amounts can remain in finished baked goods.

What’s the deal?: Acrylamide is a carcinogenic chemical that is a by-product of high temperature processing.

What’s the deal?: Salt preservative used primarily in processed meat preservation. Nitrates and Nitrites have been linked to pancreatic cancer in rats.

What’s the deal?: A processed and refined sugar extracted from corn, known to contribute to diabetes, metabolic syndrome, mercury build-up and more. Americans consume more calories from HFCS than any other source.

What’s the deal?:  BVO is a food additive that keeps citrus flavoring from separating in sodas and sports drinks.The additive is still legal in the US, even though it’s banned in the European Union, Japan and Australia because it contains bromine, the element found in flame retardants that has been linked to nerve issues. Earlier this year, Fanta, Mountain Dew and Gatorade all announced that they’d remove BVO from their products, but some generic soda brands still use it, so look closely at the ingredient list. (Or better yet, skip the soft drink and enjoy some refreshing water instead.)

What’s it found in?: Sodas and sports drinks.

What’s the deal?: The artificial colours blue 1 and 2, green 3, red 3, and yellow 6 have been linked to thyroid, adrenal, bladder, kidney, and brain cancers.

One of the best ways to avoid all of these ingredients is to buy 100% organic. Organic food production abides by strict guidelines which ensure our food doesn’t contain harmful chemical additives. Although organic food prices may be higher than non-organic, by purchasing 100% organic you are ensuring a higher quality of life without unnecessary toxins building up in your body, and really, what better investment is there than your own health?