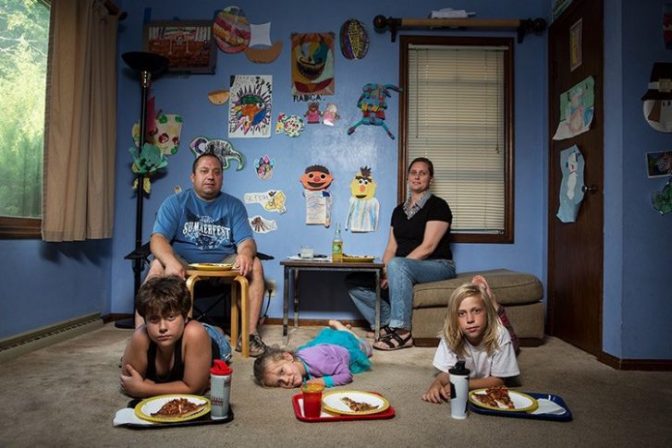 In times when the world seems divided on just about everything, it’s helpful to look at what we have in common, even when it’s something obvious. Because though the world may have its fair share of judgement, hatred, and division, we are all one, and it is far too easy to focus on what sets us apart, rather than what we share, when we let fear fuel our outlook.

In the words of Marianne Williamson:

Love is what we are born with. Fear is what we learn. The spiritual journey is the unlearning of fear and prejudices and the acceptance of love back in our hearts. Love is the essential reality and our purpose on earth. To be consciously aware of it, to experience love in ourselves and others, is the meaning of life. Meaning does not lie in things. Meaning lies in us.

When we’re not focused on our differences, on what divides us, what is left? An open mind. Photographer Lois Bielefeld wanted to represent how, in times when we are so focused on division, we must look for common ground. And it doesn’t have to be complex.

In her conceptual portrait series Weeknight Dinners, Bielefeld honed in on typical evening meals. The images, shot between 2013 and 2015, document an experience with which everyone, the world over, can relate.

The concept came back from Bielefeld’s own interest in how food connects people. Looking back on her childhood, she said her chores included making a weekend meal, which doubled as a way to bond with her family.

“I was less into the actual food until I got older and started regularly cooking and finding my own tastes,” she explained. “But even at a young age, I recognized food brings people together and is a way to explore different cultures.”

The images of Weeknight Dinners, which explore other people’s dinner habits, reflect Bielefeld’s own family ritual. Bielefeld chose to focus on specifically on weeknight meals because of the many factors that shape them. Between Monday and Thursday, busy schedules and specific routines can make way for a certain type of dinnertime that is unlike the often grand affairs that come with the leisure weekends and holidays afford.

Are people making food, ordering in, or heating up leftovers? And where in their homes are they eating it? Who are people eating with? These questions suddenly become unimportant when you take a step back and realize the common ground: Dinner happens all over the world, no matter in what way.

The series also gives way for people to be viewed as they are, rather than how they would like to be seen. “My process is straightforward. I asked my subjects to prepare whatever they normally would for a weeknight dinner — nothing out of the ordinary,” Bielefeld explains. “But I can’t control how people want to present themselves and occasionally I’d show up and there would be this elaborate meal with a Cornish game hen and fancy bowls with raspberries in it! But this to me is just as interesting and part of the series — how people want to be seen as opposed to their normal habits.”

And along with Bielefeld providing the opportunity to look into others’ lives, her project also serves as a tool to inspire its viewers to acknowledge their own place in the world. The large-scale print allow the viewer to analyze the details of each image, and self-analyze from there.

“There is a strong sense of voyeurism and a subsequent self-identification that happens when looking at the photographs,” she said. “I want people to see all of the similarities and differences that encompass our culture and hopefully be enriched by this. I also hope that they think about their own meal times and what is important to them.”