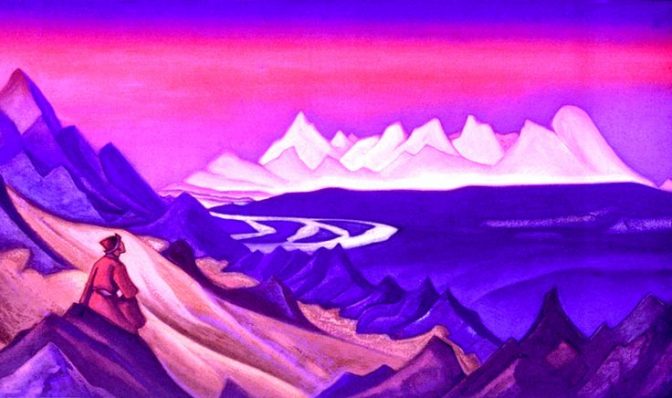 Nicholas Roerich was a Russian painter, writer, archaeologist, theosophist, enlightener, philosopher, and public figure, who in his youth was influenced by a movement in Russian society around the occult.

Roerich was passionate about the cross-fertilization of the arts, and the pursuit of refinement and beauty was absolutely sacred to him. It was his belief that “although earthly temples and artifacts may perish, the thought that brings them into existence does not die but is part of an eternal stream of consciousness—man’s aspirations nourished by his directed will and by the energy of thought.”

He constantly sought to break down compartmentalization, and even in his own art he defied categorization and created a universe uniquely personal. In his writings on ethics it can also be seen that he constantly sought to connect ethical problems with scientific knowledge of the surrounding world.

It was his core belief that peace on Earth was a prerequisite to planetary survival and the continuing process of spiritual evolution, and he encouraged his fellow man to help achieve that peace by uniting in the common language of Beauty and Knowledge.

The essay below (from 1934) is an eerie foreshadowing of the current state of affairs in society today, and comes from Roerich’s book, “The Invincible

Bestia is a Latin word. It means a bast, an animal. It spread over the face of Earth, because this definition was needed in the most diverse circumstances. Bestiality and brutality have frequently struck human thinking. Mankind has tried by all possible means to get rid of beastly instincts. The worst of human conditions have been rightly termed bestiality and brutality.

It is said that want and suffering purify human consciousness. One may ask, What kinds of suffering are still needed? What other deprivations must humanity go through in order to remove itself from low bestiality? Someone warns that many catastrophes must sweep over our beclouded Earth. Someone affirms that certain islands will sink, that new seas will rise; but how vast must the areas of these new aquatic expanses be before people will think seriously about this! It is deplorable to think that people become so easily accustomed to even the most terrible state of affairs. It is as if there were some sort of demand for a hastened progression of reactions for the purpose of perplexing the contemporary mind in order to compel it to think about the paths of the near future.

It is said that most of today’s young people look first of all for the sports and film pages in the newspaper. It is said that many of them have difficulty in enumerating the greatest philosophers, but at the same time will name without one mistake the prize fighters, sports celebrities, and moving picture stars. Maybe it is not quite so, but the stories told by professors and schoolteachers make one ponder about the contemporary trend of thought.

Likewise, all this makes one reflect about what has pushed the present generation to such extremes. Whoever reads about the last years of the Roman Empire or about Byzantium finds perhaps to his amazement many parallels with today. Among these the most striking will be the gravitation towards the circus, prize fights, races, and all kinds of lotteries.

Very soon every village, and perhaps every street, will have its beauty queen, or its remarkable arm or leg, or its own special kind of hair! It is as if human imagination cannot be inspired by anything else, while at the same time the unsolved purely mechanical problems impeded the flow of progress.

Countries, institutions, private persons, are living beyond their budgets, multiplying the grand total of earthly indebtedness. This material insolvency is not limited to earthly, mechanical conditions only. It will pass into another, far more dangerous, indebtedness; and if the planet becomes a spiritual debtor, this frightful debt can become an overwhelming impediment to all success.

“Dogs are barking – the caravan goes on,” says optimism; and pessimism recalls how packs of wild dogs once devoured the watchman of a powder magazine. All that was left of him was his rifle, his cutlass, and a few buttons. And after this incident any passer-by could without interference set fire to the powder magazine and cause irreparable harm. But let us follow the ways of optimism, and let us accept each dog’s bark as a sign of some new movement, useful and undeferrably needed.

At times, even the worst pessimistic signs will be only that natural selection which, for the good of the constructive process, has to take place in any event.

Monsters are especially terrible when they are hidden in darkness. But when they sooner or later crawl to light, then even their ugliest grimaces cease to be terrifying. To know will already be to advance.

These powerful words are a reminder of how time may not exactly be a type of linear progress, rather a cyclical pattern that must be understood in order to metamorphosize, — and that, while seemingly terrifying, once a “monster” steps into the light — it too may have the power to be transformed.