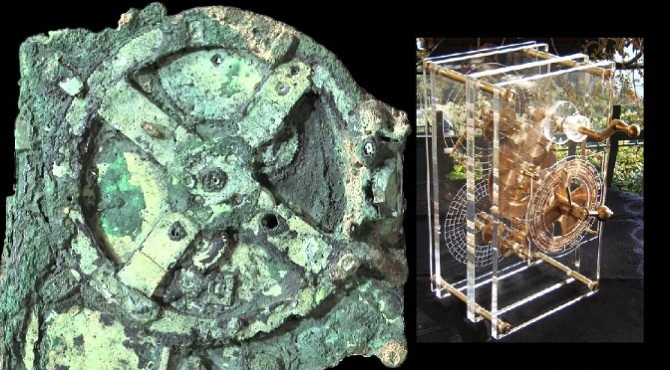 In an ancient shipwreck off the the shore of the Greek Island of Antikythera, explorers discovered what is now known as the Antikythera Mechanism.

Discovered in 1901, it was a mystery for over one-hundred years as to what exactly this device was and how it operated due to centuries of ocean water damage. Now, its elusive purpose and puzzling complexity is finally understood and its significance in human history is far greater than ever imagined.

This ancient mechanism is a computational device that was crafted over two-thousand years ago in order to calculate astronomical positioning and alignments for calendrical and astrological purposes, as well as determining the cycles of the Olympic Games.

This ancient analog computer was constructed using an intricate assembly of nearly 30 bronze gear wheels contained within a carefully designed case with an array of dials on the outside of it.

Researchers are perplexed by this device as it demonstrates technological understanding similar to that of the 18th century, yet it was constructed between 150 and 100 BCE. All known ancient instruments that even begin to compare to the mechanical complexity of this celestial super-computer were all created at least a thousand years later.

Perhaps the brilliant minds behind the design and construction of the Antikythera Mechanism suffered the same peril alongside their creation, leaving the world to rediscover the computation of astronomical positioning.

In the video below, UK Mechanician & Historian of Mechanism Michael Wright has recreated a fully-functional Antikythera Mechanism, the first ever recreation of this device that demonstrates its full range of operation for the first time in 2,000 years.