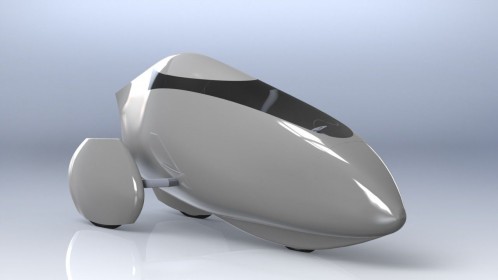 If you don’t know what a velomobile is, it is basically a car that is powered by humans. You may have heard of it by its other name: the bicycle car. They are the safest bikes out there, because they have a shell that is shaped for aerodynamics and provides protection against most crashes. They are also some of the most eco-friendly solutions for transport out there.

While there are versions of velomobiles that resemble bicycles in that they have two wheels, most of them have three or four for extra balance. They still have the steering of a bicycle, which is why they are known as bicycle cars. Some velomobiles are hybrids, with pedals and a motor, while others are completely powered by humans. The man-powered vehicles are obviously far less impactful on the environment than their counterparts with motors.

Since the 1930s there have been many different designs of velomobile. Some of these have been absolutely outrageous, while others have led to the bicycle car becoming a fixed part of the cycling community, mainly because of the comfort of a car that it so creatively pairs with the sustainability of a bicycle.

In the future, they could even become the new mode of transport. In a world that is increasingly becoming polluted every day, the bicycle car could be a step in the right path. For this to happen though humans need to become more active than they are right now. In the present day, vehicular emissions are the leading contributor to global warming. As more cars fill the streets, the millions of running engines and burning fuel cause insane amounts of damage to the environment every SECOND. On the other hand, velomobiles are literally a breath of fresh air.

After all, the point of the velomobile is that you physically exert yourself in order to propel the car along the streets. The use of pure manpower to propel the vehicle makes for one of the most innovative creations in the history of mankind. The combination of clean biking energy, with the only emissions being the CO2 that we breathe out while cycling, with the luxury of a recumbent bike and the protection from the elements that a car can offer all result in a beautifully inspired mode of transport that is cleaner than a lot of men. Some velomobiles have been made for racing as well, as the aerodynamic design allows for much higher speeds.

If you want to see a pictorial representation of the history of velomobiles, check out this infographic from Icebike.org:

The infographic showcases thirty of the most historic designs of velomobiles since the 1930s. You will be able to see a whole range of bicycle cars, and perhaps even understand why they could be a source of clean, sustainable energy transport in the future.