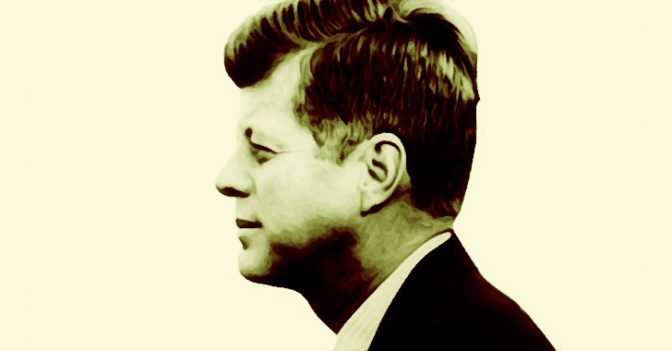 (ANTIMEDIA) — On October 26, nearly three thousand files related to the assassination of President John F. Kennedy were released to the public. After more than fifty years, the public may now have a clearer picture of what took place behind the scenes following the public murder of an American president. However, even with the latest document dump, thousands of related classified files still remain hidden from public view.

On Thursday, Trump’s press secretary released a statement explaining the last minute decision to keep certain files classified. According to the statement, the National Archives will release more records by April 26, 2018. “JFK Files are being carefully released. In the end there will be great transparency. It is my hope to get just about everything to public!” Trump tweeted. Media pundits called out the president for failing to keep his promise while others, including Julian Assange, defended him and placed the blame on the CIA and the “Deep State.”

The agencies have had literally 25 years to prepare for the scheduled release today. The delay is inexcusable. @realDonaldTrump

Despite the last minute hand-wringing, the newly released files do include some interesting bits of history that illuminate the type of thinking that goes on behind closed doors at the CIA and the FBI. Let’s take a brief look at a couple of these documents.

1. Foreknowledge of the assassination

In a November 26, 1963 memo to the director of the FBI, it is reported that an anonymous call was placed to the Cambridge News on November 22 warning of impending “big news.”

“The caller said only that the Cambridge News reporter should call the American Embassy in London for some big news and then hung up,” reads the memo from former CIA Deputy Director James Angleton. According to the Daily Mail, London lawyer and JFK researcher Michael Eddowes said in 1981 that there was a call to the Cambridge News and that he believed the caller was British-born Soviet agent Albert Osborne. “Mr. Eddowes also argued in his book, The Oswald File, a Soviet agent imposter took the place of Lee Harvey Oswald after the murder and allowed Jack Ruby to kill him while the true Oswald was hidden in Russia,” the Mail reports.

2. Oswald working for the CIA?

In a 1975 deposition to the Rockefeller Commission on CIA Activities in 1975, then-CIA Director Richard Helms is questioned by attorney David Berlin about the CIA’s involvement in the JFK assassination. After a brief back and forth between the two men, Berlin begins to ask Helms if there is any information indicating Lee Harvey Oswald — the apparent lone wolf assassin — was a CIA agent. The document then abruptly cuts off.

BERLIN: Well, now, the final area of my investigation relates to charges that the CIA was in some way conspiratorially involved with the assassination of President Kennedy. During the time of the Warren Commission, you were Deputy Director of Plans, is that correct?

HELMS: I believe so.

BERLIN: Is there any information involved with the assassination of President Kennedy which in any way shows that Lee Harvey Oswald was in some way a CIA agent or agent…

(For a deeper look into the possibility of Oswald as a CIA agent see this.)

3. FBI was tipped off one day before Oswald was killed

In a memo dated Nov. 24, 1963, J. Edgar Hoover, Director of the FBI, acknowledges that FBI agents were warned by an unidentified man about the threat on Lee Harvey Oswald’s life one day before Jack Ruby killed him. Hoover says the FBI contacted Dallas police after receiving the call.

A newly released FBI document reveals that Soviet intelligence officers suspected President Johnson of involvement in the JFK assassination. The Soviets’ suspicion of LBJ was confirmed in a memo forwarded from FBI Director Hoover to President Johnson’s assistant, Marvin Watson, on December 2, 1966. Initially, the Russian officials “believed there was some well-organized conspiracy on the part of the ‘ultraright’” involving the assassination of JFK.

“Our sources added that in instructions from Moscow, it was indicated that ‘now’ the KGB was in possession of data purporting to indicate President Johnson was responsible for the assassination of the late President John F. Kennedy,” the document reads.

Former President LBJ has long been the subject of conspiracy theories regarding his involvement with the JFK assassination. The new files will likely add to the speculation.

5. Members of assassination investigation suspected journalists of working with CIA

During the investigation into the assassinations of JFK and Martin Luther King Jr., Walter Fauntroy, an activist and delegate to the U.S. House of Representatives, began questioning officials about the CIA’s covert efforts to infiltrate the U.S. media. In late April 1977, Fauntroy sent out a letter to former CIA Director Stansfield Turner regarding his concern that the CIA was manipulating the investigation into the assassination of JFK and MLK Jr. At the time, Fauntroy was known for questioning the CIA’s role in the investigation.

“The Central Intelligence Agency has about three dozen American journalists working abroad on its payroll as undercover informants, some of them as full‐time agents,” the article states. “After William E. Colby, Director of Central Intelligence, ordered a review of the practice two months ago, agency officials found the names of some 40 full‐time reporters, free‐lance journalists and correspondents for trade publications in their files as regular undercover contacts who supplied information to agents in the field and who are regularly paid for their services.”

These reports led Fauntroy to question Director Stansfield on whether or not the practice was still taking place and might possibly interfere with the House Assassinations Committee, the group tasked with solving the JFK and MLK murders. “While I am a strong supporter and advocate of hard, factual news coverage, I am concerned that some of the news reports have been unfair and without bases,” Fauntroy wrote. “I simply want to be certain that there is no connection between the manner in which the news is reported, and the past relationship of certain journalists to the  CIA.”

Fauntroy’s concerns seem well-founded when taking into consideration that only years before he wrote the letter, it was revealed via the Watergate Scandal and reporting from Seymour Hersh that the CIA operated a mass surveillance network with which they spied on activists and infiltrated news organizations. Further, in 1977 Carl Bernstein reported there were actually hundreds of journalists working for the CIA throughout the previous two decades.

While the new documents do not reveal the complete truth about who was involved in the assassination of John F. Kennedy, they will continue to fuel the fire that is JFK conspiracy research.