6 Lessons I Learned From Befriending A Stranger 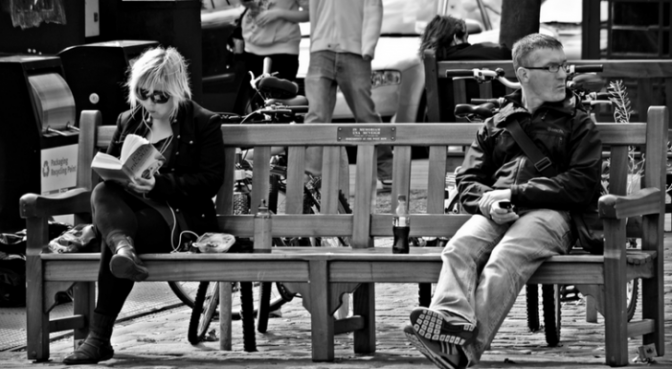 The “Golden Rule” is a maxim which teaches us that one of the most important values in life is to treat others how you would want to be treated. A simple rule to follow, but perhaps one of the most difficult – as it sometimes can be easier to judge, react, or ignore the people we encounter on a daily basis. However, if we step outside of our “comfort zone” and apply the rule to our everyday life, we can come to understand that the wisdom behind the words would have us look at each person as a reflection of ourselves, so we mirror what we wish to see in the world.

Over the past few years, I’ve experienced an awakening which has pushed me to step outside of my comfort zone by living the Golden Rule as much as possible and approaching each person I have the opportunity to meet with the ethos of this maxim. Last summer my boyfriend worked as a tour manager for a group called The Budos Band, which took him on a west coast tour for a few months. I decided to spend the time alone, writing, contemplating, and meditating on my path and purpose. One day, I brought a backpack full of books and some art supplies to the pool at our apartment complex, and as I sat and read, and enjoyed the beautiful day – suddenly an older gentleman came and sat in the chair next to me. I happened to notice he was reading a book called “The Secret,” and one of the books I had happened to bring that day was its sequel, “The Secret: The Magic.” Normally, I would have just kept to myself, but I felt compelled to talk to him, and a simple chat about our reading material turned into an in-depth conversation about life, death, dimensions, the nature of reality, and angels. This gentleman, named John, was briefly staying in the complex while he helped his nephew, but he and I exchanged numbers and cultivated a deep friendship over the course of the year. John, as it turned out, had studied with Zen Masters and occult experts, and was extremely well-versed in metaphysics, freedom from fear, the art of tarot as a means of understanding our life’s experience/the fragments of our soul, and the importance of Chi (fundamental life force energy).

We would talk on the phone once every few weeks, for hours at a time. The last time I saw John was in February, when my boyfriend and I invited him over for dinner and some armchair philosophy, and the last time I heard from him was when he texted me on my birthday. On May 19th I received a friend request from his son, and a message asking if I knew his father. My heart dropped when I read “knew,” as the past tense… it turns out that on April 20th, John committed suicide. I was heartbroken and confused – the notion of someone who had been a spiritual mentor of sorts being driven to suicide left me with more questions than ever.

Through the process of grieving, and coming to understand that the “why” is always why – and our questions are the answer – I have come to accept that some things may never make sense, but making sense of the nonsense is the alchemy of our life’s experience. The lessons we learn allow us to transmute the darkness into light, and while my heart aches that John is no longer here – the lessons I learned by befriending him have forever changed me.

6 Lessons I Learned From Befriending A Stranger

1. “Your only limitation is your imagination.”: John’s perspective on the nature of reality was that the future doesn’t exist, it must be created, so time is malleable according to your own thoughts. When I felt afraid, or worried about my future – he would say that I wasn’t using my imagination properly, and in order to create a better future, I must imagine the future being better, now. All that exists is now, and even just reading this sentence – is already in the past. If we imagine the future being now, and let go of worry/fear – we can live exactly how we want to live now, without having to wonder when.

2. “Teach, not talking.”: John taught me of this concept after he discussed the time he spent studying martial arts. While at first it was a bit taxing to wrap my head around what this exactly meant, in time I came to realize the lesson of this statement is that “being is doing,” and in order to really teach – you must embody what you’ve learned, not talk about it… be about it.

3. “The fastest way to win an argument, is to just admit you’re wrong.”: The majority of the lessons John imparted to me revolved around stripping away the ego, and reuniting with love and forgiveness. He explained holding on to anger was similar to holding on to a burning hot coal, and the fastest way to let go of anger – is to simply drop it. While it may be hard to drop the ego in the heat of the moment, especially during an argument… admitting you’re wrong and forgiving the other person is more powerful than any other “defense.” Strength comes from admitting you’re wrong, and rising above the problems you encounter.

4. “‘Truth’ – Death is stripping away all that is not you, the secret to life is to die before you die, and find that there is no death.”: The last time I saw John, he brought me a copy of Eckhart Tolle’s “The Power of Now” with these words inscribed on the front page. Words that I will forever hold close to my heart, especially now that he is no longer with us. When thinking of life and death, I’ve come to realize that, like hot and cold, waking life and dreams, birth and old age, the two will never be separated – so the secret to enjoy the now is to dissolve fear, and fully live – to fear death is to fear life, and to “die before you die” will allow you to fully embrace every waking moment for just how precious it really is.

5. “It is easier for a camel to go through the eye of a needle than for a rich person to enter the Kingdom of God!”: While John did not consider himself religious, he often talked about the power of the parables in the Bible as being somewhat alchemical, in that the messages change as you shed more light on them with your personal experiences. One particular lesson was this quote… you can read it a hundred times, and it may resonate a little differently, but what I took away from it – is that at the end of the day, what you make is not what you take – and being rich in your heart is more valuable than all material wealth.

6. “Angels are real, but not exactly in the way you may think.”: When I first began a conversation with John that synchronistic day last summer, the first question he asked me was, “Do you believe in angels?” – to which I replied, “I’m not sure.” What I came to find after getting to know him, and what I’ve experienced in my own life, is that angels are real – but not in the way you might imagine. While the notion of metaphysical beings that are here to assist us is something that resonates with me, I believe there are also angels here on Earth that come into our lives for a reason… to assist, to allow us to remember love and forgiveness, and to help us cultivate the best version of ourselves. I believe John was an Earth angel of sorts, and the gift of his friendship was one of the most precious treasures I have ever received.

If you, or someone you know is feeling thoughts of suicide, or depression – please be sure to reach out for help. Calling 911 or the National Lifeline at 1-800-273-TALK (8255) is also a resource for you or the person you care about for help. Remember, always take thoughts of or plans for suicide seriously.