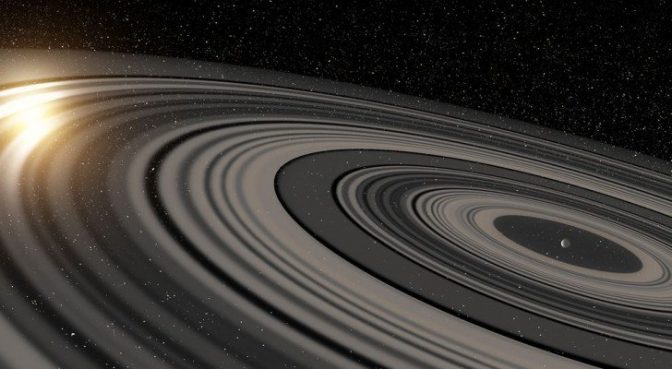 A team of U.S. and British astronomers have just discovered what may be a massive planet with rings 200 times the size of Saturn’s.

Move over solar system giants, there’s a new contender in town. Well, maybe it’s not exactly ‘in town’ in relative terms, but in cosmic terms 430 light years away can still be considered a neighbourly distance.  Its name is J1407b, a planet astronomers are excited to add to the 2,000 or so exoplanets discovered so far.

What makes this so-called planet even more exciting to astronomers are its planetary rings, which are 200 times those of Saturn – hefty bragging rights, indeed. The planet was discovered by accident in 2011 when Mark Pecaut, then a graduate student at the University of Rochester, in New York, was looking at data from the SuperWASP exoplanet search. He was interested in stars, not planets, but the SuperWASP archive had data on these as well, and in particular on the rotation rates of young stars in a group known as the Scorpius-Centaurus Association.

All of the stars looked unremarkable, except for one. Pecaut noticed an odd waxing and waning of the star’s light, says co-author Eric Mamajek of the University of Rochester, “and when I first saw his printout, I knew we had found something remarkably weird.”

Instead of dimming slightly for a few hours, as would happen if a planet passed in front of the star, this star had flickered for about two months—dimmer for a while, then a little brighter, then dimmer again. “At first,” says Kenworthy, “you think you’re just looking at noise in the camera.” But the information was extraordinarily clear. “It’s one of the most beautiful data sets I’ve ever seen,” he says.

The astronomers realized right away that they might be looking at a system of rings passing in front of the star. But for the rings’ passage to last two months, they would have to be gigantic, much larger than any ever seen before. The team worked hard to see if there could be another explanation —individual clouds of dust dimming the star, for example. In 2012, after a year of consideration, they announced their find.

Even then, the claim of a giant ring system was met with a lot of raised eyebrows, recalls Mamajek. The new analysis has eased the skepticism somewhat by nailing down the rings’ structure more precisely, and showing how the rings would produce just the pattern of flickering the astronomers saw.

Are We Seeing Young Rings In Transition?

Astronomers are still perplexed about one thing, however. Considering the estimated age of this planetary body and its rings is only 16 million years old, then the massive rings should soon be condensing into moons, such as what happened during Saturn’s formation.

It’s a remarkable coincidence that astronomers managed to spot it during such a transient phase of its life.

“You have to wonder how likely it is,” he says, “that you’d see something during such a relatively rapid transition” says Penn State’s Eric Ford, who specializes in exoplanets.

Adding to the question is the fact that astronomers can’t exactly see the so-called planet in the center of the rings, and are guessing that they are seeing it at an improper angle.

Another problem, the authors acknowledge, is that the ring system (if that’s what it is) has passed in front of the star only once. Harvard astronomer David Kipping says the signal is “interesting, but without repeat observations I think it’s being treated skeptically at this stage.”

For now, the system is being monitored very carefully in order to add more credit to their hypothesis.

“It will be very interesting to see what picture forms as each new observation adds a new piece of the puzzle,” says Natalie Batalha, a leading member of the team behind NASA’s wildly successful Kepler planet-hunting mission. “This could indeed end up being the first ringed planet [found] outside our solar system.”