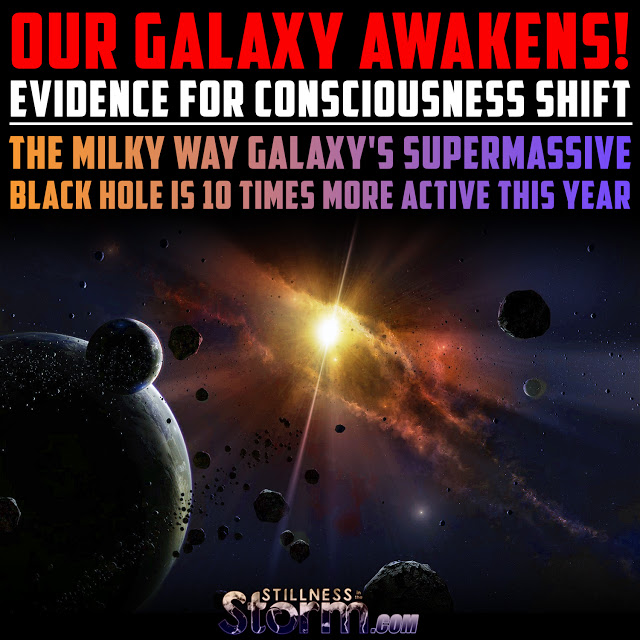 Source: Stillness in the Storm

The universe and all life in it seem to be organized via a process of entrainment or synchronization. From the very large to the very small, from the material to the metaphysical, all things are in motion, swirling and cycling waves of energy, condensed matter and thought.

The following article compiles scientific measurements of Sagittarius A*, the astronomical name given to the black hole at the center of our galaxy, the Milky Way galaxy.

A few items I found of note were the fact that x-ray emissions from the center of the galaxy have increased tenfold over the past year when compared to the previous 15 years of observation.

Related Science of Life, The Universe and Everything? | Dewey B Larson’ Reciprocal Systems Theory – Walking the Path of Truth in a World of Deception

The center of the galaxy’s recent increased activity, within an RS interpretation, suggests that material has been aggregating or condensing from the metaphysical region back into the material universe, able to be measured by the observatory as increased x-rays. Scientists at the Max Planck Institute for Extraterrestrial Physics in Germany are unsure what causes the increased emissions, but they have already acknowledged the presence of a “dusty object,” which is verifies the RS interpretation.

It appears that the galaxy has been undergoing some process of reorganization, a condensing of material out of the metaphysical region of the universe, into the material sector. This suggest that the metaphysical region of the universe is also undergoing some level of reorganization, which we can effectively call a change in the consciousness of the galaxy itself. In other words, the galaxy itself seems to be undergoing a shift in consciousness, if an RS interpretation is correct.

Many researchers, mystics, and lightworkers have suggested that the Earth is presently being bathed in higher vibrational energies that affect consciousness. This recent discovery by the Max Planck Institute may be verifiable evidence that this evolutionary process is well underway. And if we consider the mechanics of entrainment, this process will continue to accelerate towards an eventual quantum leap event of reorganization.

Related The Energetic Evolution of The Solar System | At the Earth’s Core: The Geophysics of Planetary Evolution

The above-linked article outlines what the evolution of the solar system would look like within the RS model of the universe. Which explains the expanding Earth data collected by researchers over the years, as well as the peculiar nature of quantized stellar activity; stars that are either blue, white, yellow, orange, red and so on.

Personally, I think we will see many more heralds of the cosmic shift that has been unfolding for years. The universe is fundamentally interconnected or holographic in nature, and as such, changes in consciousness will have a direct physical manifestation although it may not be easy to recognize.

The following related articles expand on the evolutionary model of the universe gaining popularity in these shifting times.

Related Is This A Sign of Increased Energy Affecting The Earth? | Global Earthquake and Volcanic Activity Spiked Last Week

Related All Life is Connected via EMF Entrainment | Solar Revolution Documentary (2012) – Reveals the Science of Entrainment, along with the Sun and Galaxies Influence on Human Affairs

If anyone needs a confirmation of this energetic change we’re experiencing as well as expecting more of, scientists have just confirmed it. This is big news and should be an encouragement to many that what we’ve been sensing does indeed have a confirmed, identifiable physical counterpart.

Three orbiting X-ray space telescopes have detected an increased rate of X-ray flares from the usually quiet giant black hole at the center of our Milky Way galaxy after new long-term monitoring. Scientists are trying to learn whether this is normal behavior that was unnoticed due to limited monitoring, or these flares are triggered by the recent close passage of a mysterious, dusty object. [Emphases mine]
By combining information from long monitoring campaigns by NASA’s Chandra X-ray Observatory and ESA’s XMM-Newton, with observations by the Swift satellite, astronomers were able to carefully trace the activity of the Milky Way’s supermassive black hole over the last 15 years. The supermassive black hole, a.k.a. Sagittarius A*, weighs in at slightly more than 4 million times the mass of the Sun. X-rays are produced by hot gas flowing toward the black hole.
The new study reveals that Sagittarius A* (Sgr A* for short) has been producing one bright X-ray flare about every ten days. However, within the past year, there has been a ten-fold increase in the rate of bright flares from Sgr A*, at about one every day. This increase happened soon after the close approach to Sgr A* by a mysterious object called G2.
“For several years, we’ve been tracking the X-ray emission from Sgr A*. This includes also the close passage of this dusty object” said Gabriele Ponti of the Max Planck Institute for Extraterrestrial Physics in Germany. “A year or so ago, we thought it had absolutely no effect on Sgr A*, but our new data raise the possibility that that might not be the case.”
Originally, astronomers thought G2 was an extended cloud of gas and dust. However, after passing close to Sgr A* in late 2013, its appearance did not change much, apart from being slightly stretched by the gravity of the black hole. This led to new theories that G2 was not simply a gas cloud, but instead a star swathed in an extended dusty cocoon. (Source) An interesting idea there, even though we know NASA and related agencies are filled with deceptive and false information. But I find it compelling that they’d announce finding a cocooned or cloaked star that unexplainably passes near the massive black hole at the center of the galaxy, which as we know is where the energetic forces emanate from and enlivens the stars and other bodies and all energetically connected aspects in our the milky way.
We know that the position of the stars and planets directly influences our lives. How much more then do massive energy shifts and pulses coming from the gigantic center of our galaxy?
There are many ideas about the nature of this energetic change many of us have been feeling some time. David Icke called them truth vibrations decades ago, while it’s recently been termed “Wave X” as well as ascension facilitating energy and many other things having to do with our spiritual growth and empowerment by helping to raise our vibrations and hence conscious awareness.
The Wave, CERN and Geoengineering
Certainly hidden science has known about this and other similar phenomena for a long time. That this information becomes available right now is rather prescient just as we see the attempt to put these last pieces of the global takeover into place.
We know the geoengineering agenda has many purposes. It’s been thought by many that chemtrails are being put in place to block this energetic change from reaching us. It cannot succeed of course but it may hinder some influences, I don’t know. Now think about CERN with a magnetic force 100,000 times stronger than earth’s magnetic field, according to their own website. That’s a lot of power and extremely disruptive, the full use and effects of which we’re yet to see.

Is one of CERN’s purposes to deliberately tamper with our magnetic field, and is this an attempt to jam these incoming, empowering frequencies? At the least it will alter the very resonance of our planet and everyone on it. One thing we can be sure of, their mad intentions are not for humanity’s benefit.

Surf’s Up!
Whatever these energetic changes emanating from the center of our galaxy are, we certainly could use further empowerment and it sure appears Universe is supplying it! But remember, this nor anything else will be some kind of the cavalry coming to our rescue. It’s fully up to each of us individually us to utilize whatever is available to us. This and other influences already at our fingertips won’t do anything by themselves. It’s up to us to activate them in our lives.
So let’s see what it brings!
Surfs up! Enjoy the ride and look for the manifestations in your own life and let them unfold.
Much love, Zen
Source: