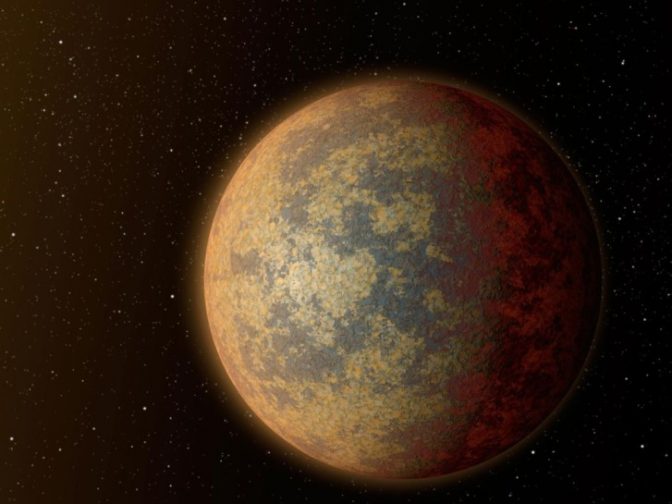 Wolf 1061c, a so-called “super-earth“, has been recently discovered – and it is believed that this planet may have the potential to support life. Orbiting in the habitable “Goldilocks zone” (where temperatures are just right for liquid water/supporting life), Wolf 1061c is one of three planets orbiting a red dwarf star called Wolf 1061, and is just 14 light-years away.

According to Duncan Wright of the University of New South Wales in Australia:

“While a few other planets have been found that orbit stars closer to us than Wolf 1061, those planets are not considered to be remotely habitable,”

“It is fascinating to look out at the vastness of space and think a star so very close to us — a near neighbour — could host a habitable planet,” Wright says.

The planet has been described as an “oversized rocky planet circling a star that is dimmer and smaller than our sun.”

The UNSW team hopes to study the atmosphere of the planet in the future to see if it might be conducive to life. It could also make an excellent candidate for observation by the next generation of powerful telescopes, starting with the Transiting Exoplanet Survey Satellite (TESS) and the James Webb Space Telescope, both set to launch in the next 2 to 3 years .

Other potentially habitable exoplanets tend to be hundred or thousands of light-years away, but with Wolf1061c being only 14-years away may hold a lot of potential for exploration, or potential habitation. With the rapid speed of technological advancement, one can only imagine the possibilities for the future!