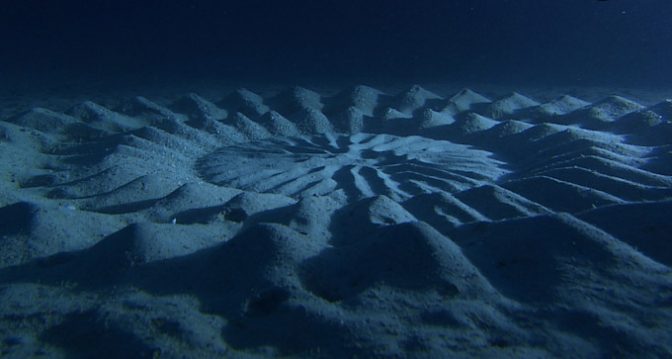 The video below, from BBC One, shows a Japanese pufferfish creating “crop circle” in an attempt to attract the attention of a female mate.

According to Live Science:

In 1995, divers noticed a beautiful, strange circular pattern on the seafloor off Japan, and soon after, more circles were discovered nearby. Some likened these formations to “underwater crop circles.” The geometric formations mysteriously came and went, and for more than a decade, nobody knew what made them.

Finally, the creator of these remarkable formations was found: a newly discovered species of pufferfish. Further study showed these small pufferfish make the ornate circles to attract mates. Males laboriously flap their fins as they swim along the seafloor, resulting in disrupted sediment and amazing circular patterns. Although the fish are only about 12 centimeters (5 inches) long, the formations they make measure about 2 meters (7 feet) in diameter.

When the circles are finished, females come to inspect them. If they like what they see, they reproduce with the males, said Hiroshi Kawase, the curator of the Coastal Branch of Natural History Museum and Institute in Chiba, Japan. But nobody knows exactly what the females are looking for in these circles or what traits they find desirable, Kawase told LiveScience.

Nature is truly marvelous, and contains so much mystery and wonder. We can’t help but be reminded of our article on Cymatics (The Shocking Secrets of Sound) as we watch with awe-inspired eyes at the beauty of life.