A Message from the Ancients 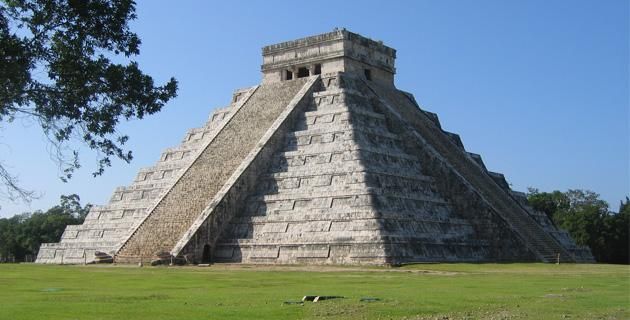 “Nothing you have learned is true.” A voice spoke in the silent stillness.

“Nothing you have learned is true.”

The voice repeated once again with absolute confidence and clarity, so I would not misunderstand their message.

In 1979, at the age of eighteen, I flew down to the Yucatan with a friend as we planned to backpack Mexico from coast to coast. After touching down in Cancun, we headed off to Isle Mujeres where I encountered my first crumbling Mayan ruin. It was fairly insignificant but there was something about just being in the place that triggered subtle memories and awakened a place deep inside me.

After a week strolling and dancing on the beach we headed out by rickety bus to Chichen Itza, the ancient Mayan city located deep in the heart of the Yucatan. Today Chichen Itza is a World Heritage Site and is packed with tourists every day of the year. But back in 1979, over 30 years ago, only a few hard core travellers and archaeologists made the journey. After a hot, bumpy ride on a rickety bus, we finally arrived at our destination and stepped off and onto a dirt road in the middle of what seemed like nowhere.

We found a half finished hotel and once settled in, we asked for directions and headed out on foot down the dusty dirt road towards Chichen Itza, the famous ancient Mayan ruin. The site was surrounded by a barbed wire fence and besides a few meandering cows and people we pretty much had the entire site to explore for ourselves. The landscape was breathtaking and I was completely mesmerized by the magnificence of the buildings, the road systems and the precise rock and art work of the site. The stone construction was unimaginable and challenged everything my mind knew with regards to human history and the knowledge I had been taught thus far. How could they have cut the stone so precisely and moved into the exact place when the stone were huge and the tools and people were primitive. There was this sense of timeless intelligence infused within every stone that was mysterious; leaving me both amazed by what I saw, and bewildered by my internal stories.

I had just finished 13 years of school, and yet I had no memory of learning anything about the ancient Mayan civilization. My studies were primarily focused on the ancient peoples of Europe and the Middle East. Why? This civilization was obviously advanced in astronomy, mathematics, the arts, healing and architecture and should have had a higher profile in my studies regarding our collective human history.

The stone structures included what I believed was a healing sanctuary, an observatory, the largest known ball court in the Americas, a road system, advanced stone work and construction. The most prominent stone structure was the Temple of Kukulkan, or El Castillo, a pyramid that demonstrated the accuracy of the Mayan astronomy having a total of 365 steps divided between the four sides and the top plateau. Twice a year on the spring and autumn equinoxes the shadow of a serpent appears and winds its way down the steps to join the stone serpent head at the base of the pyramid. How could an ancient civilization with primitive knowledge demonstrate such accuracy in designing and constructing timeless structures in alignment with the heavens?

With the passing of December 21st, 2012 awareness of the Mayan Calendar and it’s calculation of the beginnings and endings of nine cycles spread throughout the world, but in 1979 I knew nothing of this. The Mayan Calendar describes the cosmic energies that impact the earth, humanity and the universe. The first cycle goes all the way back to 16 billion years ago with the forming of galaxies and fast forwards to the modern era. According to the Mayans, during this present era humanity will release former destructive belief systems, shifting into a new cycle that will be based upon equality, respect for nature and unity consciousness.

As mentioned though, I was unaware of any of this information on the Mayan civilization, or their calendar. But I was very aware on another level. As I wandered throughout the ruins I felt like I had stepped through a veil separating two distinct worlds, the world of the Mayans and my own. There was a spiritual presence that resonated within the landscape prompting deeper questioning of my own personal truths and reality.

Shortly before dusk I climbed atop the Temple of Warriors, which is a smaller pyramid directly across from the Temple of Kukulkan. I am afraid of heights and this smaller structure was a more manageable climb leading to the stars, than the steep steps of Kukulkan which was too steep and too high for consideration. Upon reaching the stone plateau, I sat in quiet meditative stillness taking in the magnificence of the ancient site and waiting for any intuitive insights to arise.

I did not have to wait long before a voice from deep within me and from the landscape, said with strength and conviction, “Nothing you have learned is true.”

There was a confident clarity to the silent voice letting me know that it was my intuitive intelligence communicating telepathically with the intelligences in the field. The message was a puzzle though as I had just completed my required schooling, and although I had my math challenges I knew that I loved learning.

Also, at the time I could not conceive of a reality where my parents and society would have me dedicate years of my life to anything if it wasn’t important and valuable. If I knew nothing of this advanced civilization, how much more valuable information was missing from my education? My days of wandering throughout the ancient Mayan civilization had opened a floodgate of questions regarding the truth about me, my life and human history.

Questions that pioneering researchers like Michael Tellinger with his work in South Africa and revealed in one of his many lectures, “Connecting the Dots – The Great Human Puzzle,” and Semir Osmanagich on the Bosnian Pyramids and pyramids of the world, and Graham Hancock who has been bravely challenging academia and our beliefs about human history for decades. These are just a few of the many brave individuals who are working to discover or rediscover the truth of humanity, and all reference the lies and fiction we are conditioned from birth to accept as truth regarding the history of human beings, the nature of our existence and reality.

I love learning and am a seeker so spent most of my thirties in and out of the educational system.

It was only much later, and after years of socially accepted higher learning that I arrived at a place of being so disillusioned by the educational system I dropped out of university in my third year. I dropped out because I felt the system wanted to reward students for their ability to memorize outdated information that repeated dysfunctional antiquated systems and behaviors instead of nurturing learners to question and discover truth for themselves. The learning process of academia felt robotic and lacked the space for creativity, collaboration and individual thought and ideas.

As a mature student, I knew that far too much of the information I was learning was in actual fact the very reason our planet was being destroyed and that millions of people were suffering. The educational system was dominated by a man’s worldview, by linear thinking, exploitation of planetary resources to amass wealth by a few, and validating the use of vulnerable people for profit.

My heart quietly longed to hear what a woman in history felt or knew about life, or a how an indigenous Elder thought. To jump into higher learning with such enthusiasm only to have antiquated male ideology and knowledge repeatedly transmitted through texts and ego driven professors regarding the nature of truth and reality was insulting to my feminine intelligence. Without the integration of the feminine worldview and indigenous knowledge into all disciplines our world was visibly out of balance and teetering on the edge of destruction.

As a woman dedicated to holistic thinking and human and ecological transformation, the higher learning I so eagerly sought for years was promoting all of the very beliefs I had spent my entire life working to change. These beliefs were based upon separateness and not interconnectedness; of economic development and insatiable greed instead of sustainable development; of linear thinking verses holistic creative thinking; of silent obedience and memorization of antiquated beliefs instead of critical analysis and self-determination. Students were taught half-truths, knowledge from a perspective dominated by a white European male worldview instead of inclusive of the wisdom of women, original peoples, global citizens and children. I dropped out disillusioned with the educational system and not knowing what to do with my life. I could not ethically continue to invest my time and money learning information that did not serve me or the healing of the Mother Earth, whom I saw as a living being.

It was much further down my path before I could begin to grasp the violent and oppressive history driving the loss of so many voices in leadership, knowledge making and social systems and structures