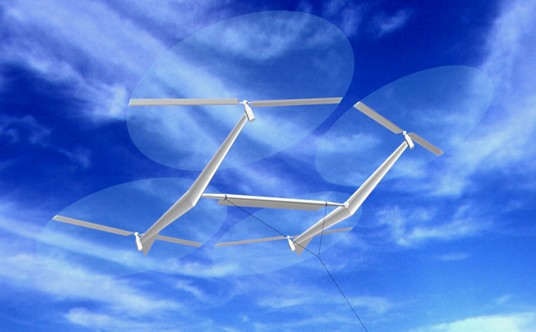 We’ve seen wind turbines fit for backyards, balconies, even oceans– and now pioneering wind-power engineers are looking to take wind turbines to new heights—15,000-30,000 feet in the air! Harvesting just 1% of the energy from jet-stream winds could produce enough power for everybody on the planet. Sky WindPower and Magenn Power are just two of the companies in the race to develop flying generators for high-altitude winds.
San Diego based Sky WindPower is developing a kite-like 1,100 pound Flying Electric Generator (FEG) capable of producing power for as little as two cents per kilowatt hour and flying between 15,000 and 30,000 feet. Four rotors at the points of an H-shaped frame provide the necessary lift to keep the platform floating in the air like a kite. Electricity generated by the spinning rotors is transmitted to the ground through aluminum cables tethered to the frame.

Sky WindPower hopes to build flying farms one day; the proposal calls for FEGs clustered in a 200-square-mile restricted airspace zone. Turbines constructed of aircraft materials would feature four 130-foot-diameter rotors and weigh in at 45,000 pounds. The FEGs would function like helicopters on liftoff, powered by the ground station until they can begin harvesting wind power. Once in the jet stream, the FEG’s vertical stabilizers would tilt the rotors at different angles to balance the platform and optimize wind speeds.

Canadian company Magenn Power has developed the Magenn Power Air Rotor System (M.A.R.S.), a helium filled wind generator that rotates around a horizontal axis and sends electricity down a tether that can be used immediately, stored in a battery or routed to the power grid. The M.A.R.S. flies at lower levels than the FEG, between 600 and 1,000 feet, and works with speeds from 4 mph to greater than 60 mph.

Another idea comes from Dr. Wubbo Ockels of the Delft University of Technology in the Netherlands. The Laddermill is a series of kitewings connected to rotate in a loop which generates energy, that electricity is then sent down a cable to the ground 30,000 feet below.

Questions of cost and stabilization will no doubt play a big factor in whether any of these projects will succeed.