Dissolving the Notion of Gender as Binary 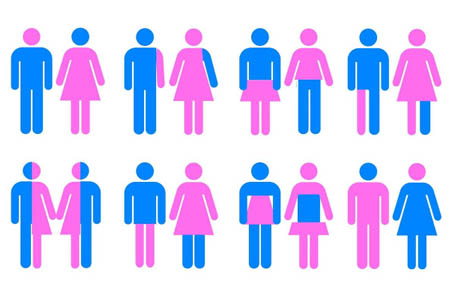 “But the reality, my reality is that I’ve been transitioning and will continue to transition all of my life, through the infinite that exists between male and female as it does in the infinite between the binary of zero and one. We need to elevate the dialogue beyond the simplicity of binary. Binary is a false idol.” – Lilly Wachowski

The Wachowski siblings are the visionary filmmakers responsible for V for Vendetta, Jupiter Ascending, Cloud Atlas, the Matrix trilogy, and Netflix’s Sense 8. Lana (née Larry) Wachowski came out as transgender in 2012, and recently her sibling Lilly (née Andy) issued a statement on her own transition, out of fear of being outed by a malicious press outlet.

Penning a beautifully worded letter to the Windy City Times, Lilly elaborates on her journey and the challenges that coincide with living as her authentic self, stating:

Being transgender is not easy. We live in a majority-enforced gender binary world. This means when you’re transgender you have to face the hard reality of living the rest of your life in a world that is openly hostile to you.

I am one of the lucky ones. Having the support of my family and the means to afford doctors and therapists has given me the chance to actually survive this process. Transgender people without support, means and privilege do not have this luxury. And many do not survive. In 2015, the transgender murder rate hit an all-time high in this country. A horrifying disproportionate number of the victims were trans women of color. These are only the recorded homicides so, since trans people do not all fit in the tidy gender binary statistics of murder rates, it means the actual numbers are higher.

And though we have come a long way since Silence of the Lambs, we continue to be demonized and vilified in the media where attack ads portray us as potential predators to keep us from even using the goddamn bathroom. The so-called bathroom bills that are popping up all over this country do not keep children safe, they force trans people into using bathrooms where they can be beaten and or murdered. We are not predators, we are prey.

I’m out to my friends and family. Most people at work know too. Everyone is cool with it. Yes, thanks to my fabulous sister they’ve done it before, but also because they’re fantastic people. Without the love and support of my wife and friends and family I would not be where I am today.

But these words, “transgender” and “transitioned” are hard for me because they both have lost their complexity in their assimilation into the mainstream. There is a lack of nuance of time and space. To be transgender is something largely understood as existing within the dogmatic terminus of male or female. And to “transition” imparts a sense of immediacy, a before and after from one terminus to another. But the reality, my reality is that I’ve been transitioning and will continue to transition all of my life, through the infinite that exists between male and female as it does in the infinite between the binary of zero and one. We need to elevate the dialogue beyond the simplicity of binary. Binary is a false idol.

Now, gender theory and queer theory hurt my tiny brain. The combinations of words, like freeform jazz, clang disjointed and discordant in my ears. I long for understanding of queer and gender theory but it’s a struggle as is the struggle for understanding of my own identity. I have a quote in my office though by José Muñoz given to me by a good friend. I stare at it in contemplation sometimes trying to decipher its meaning but the last sentence resonates:

“Queerness is essentially about the rejection of a here and now and an insistence on potentiality for another world.”

So I will continue to be an optimist adding my shoulder to the Sisyphean struggle of progress and in my very being, be an example of the potentiality of another world.

As our consciousness and understanding of the human experience (and the universe) continues to expand, the assigned role of “gender” is something very important to consider, and perhaps reevaluate. We tend to like to compartmentalize everything…black/white, straight/gay, male/female, right/wrong – yet, we leave no room for the middle, which is where we are able to come closest to our “truth”.

I relate to Lilly’s statement of “binary as a false idol”, because although I am a technically a woman – I relate more to the masculine side of my mind, and I’ve struggled with adopting the “gender roles” assigned to my sex. I have been fluid throughout my life’s journey in my sexuality, business, relationships, friendships, and notion of self. I’ve cared greatly for women, I’ve cared greatly for men – but I’ve seen each individual as a soul, not a gender. I have incredible friendships with men, and I have incredible friendships with women – but I’ve seen each individual as a soul, not a gender. I use the right side of my brain, just as I use the left side of the brain – but I’ve never considered each hemisphere as something separate from me, they are part of me. I believe greatly in science, and I believe greatly in spirit – but I’ve never seen these fields of study as separate, I’ve seen them as complimentary. The “potentiality for another world” rests in the middle, where we reconcile what we deem opposite (or odd) and find love and acceptance for what is.

Trans- as a prefix is defined as “across,” “beyond,” “through,”“changing thoroughly,” – and it is not a label to be held in contempt or judgement. We are all constantly transitioning, moment by moment, day by day, aeon by aeon – whether it be by what we learn, or experience. While Lilly’s transition is her own individual journey – she is not separate from us in any way, shape or form. Her story is one important story, of the many stories that play an integral part of our human story, and “trans” is not something to be demonized or vilified.

We are all infinite change in radical motion, and trans is a synthesis of what was, and what will be, and to me – that is absolutely beautiful.