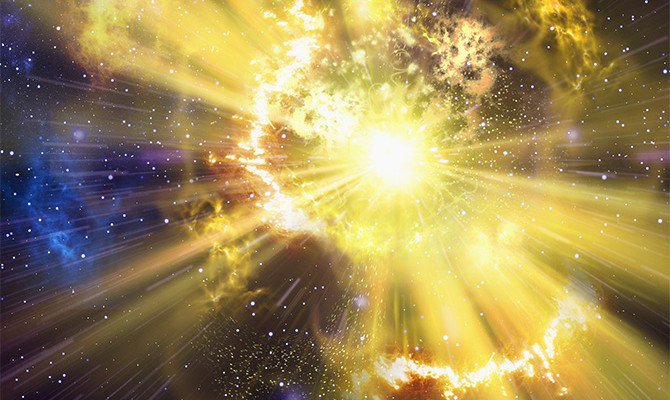 To put it in perspective, the explosion produced more energy than our own sun will produce in the next 10 billion years. Yeah, it’s big.

Discovered in June 2015 by ASAS-SN’s twin 14-centimeter telescopes operating in Cerro Tololo, Chile, the supernova just appeared as a transient dot of light in an image, and wasn’t immediately recognized as particularly special. Only after several other telescopes piled on to provide additional observations of the outburst’s fading afterglow did it become clear to Dong and his collaborators that they had seen something record-breaking. The first hint came from a spectrum of the supernova delivered by the 2.5-meter du Pont Telescope in Chile seven days after the initial discovery. “When we saw the spectrum, we were baffled,” Dong recalls. “It didn’t look like any supernova we had seen.

The explosion’s magnitude is so large that it challenges the current theories about these cosmological phenomena. Allison Eck of PBS explains:

If ASASSN-15lh’s parent star shed its out layers of gas and then collapsed its inner core to form what’s called a magnetar—a dense, rapidly rotating magnetized core—then magnetized wind emanating from that collapse could have shocked the outwardly flying matter enough produce a massive explosion. The catch is that the magnetar would have to have been spinning at a rate of one revolution per millisecond—that’s 60,000 rpm—which pushes the boundaries of what scientists think is physically conceivable. The magnetar idea may not be correct, but it’s at least plausible. Meanwhile, experts are on the lookout for other explanations.

In time, scientists will be able to look at the fading aura of the supernova and analyze its inner layers, helping them to piece together more information about the power source behind this explosion. Scientists hope that studying these types of supremely rare events will provide them with more insight into the greater cosmological possibilities of our universe.