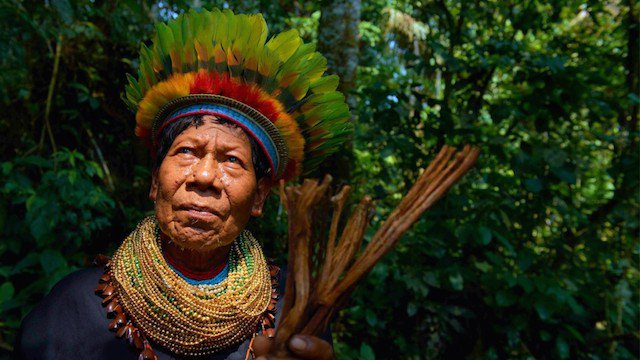 Shaman: It’s a term steeped in the ancient history of indigenous cultures around the world, but which has gained so much popularity today that it’s become somewhat of a trending term.

It was once one of those terms residing on the outskirts of society, but thanks to the modern day conscious shift, steeped in New Age ideas, it’s becoming as common as words like chakras, mantras, and meditation.

That’s not a bad thing. People are looking to wake up, to reconnect in a world where disconnection is the norm, and constant turmoil — mental, emotional, and physical — the result. This reality has provoked the innate human ability to heal ourselves; it’s an inward shift during a time where materialism has, in many ways, ruled our livelihood.

Shamanism is thought to be the oldest form of humanity seeking connection with creation; the oldest form of healing an individual. The practice dates back as far as the Stone Age, and the word shaman itself has been traced to the word “saman” in the language of the Tungus people in Siberia.

Scholars have translated this original term to “one who is excited, moved, or raised” and “inner heat,” according to American Shaman: An Odyssey of Global Healing Traditions by Jeffrey A. Kottler, Jon Carlson, and Bradford Keeney. In Redefining Shamanisms: Spiritualist Mediums and Other Traditional Shamans as Apprenticeship Outcomes, author David Gordon Wilson cites another translation as “person with supranormal skills.”

Shamanism was deeply rooted in ancient Incan, Indian, and Egyptian civilizations, and has continued to thrive, most notably with its prevalence as a term for all spiritual healers, and people seek them out for help with stress, depression, and other mental and physical conditions.

But shaman, now serving as an umbrella term for anything from Reiki masters to tarot readers, aura cleanser, and mediums, was once truly a specific term for spiritual healers with the ability to communicate with the dead.

They were thought to be able to enter a trance, or an altered state of consciousness, through ceremony. They used their crossover to see the future and heal community members, for both physical and emotional ailments. Shamans were famously known for their ability to help people understand and come to terms with their grief.

Organized religion cast a massive shadow over shamanic practices, however, causing it to be outlawed as black magic. Since then, the term has become mystical. Indigenous people still practice it, of course, but when it comes to the Western world, the practice is more or less just a vague term for anything that incorporates New Age healing techniques.
To understand shamanism is to understand its roots. The spread of Christianity largely wiped out the term for what it once was, and while parts of the world hold the original path for it to high standards, it has been translated throughout time to become something else.
And while it’s commendable that holistic healing is gaining steam in a society where Western medicine rules, it’s important to not let the niche role of an actual shaman lose its way, and rather better understand how an appointed shaman performs a ritual that involves healing the ailing, both out of respect, as well as to better understand how shamanism could benefit your own life if you are suffering from mental or physical ailments.