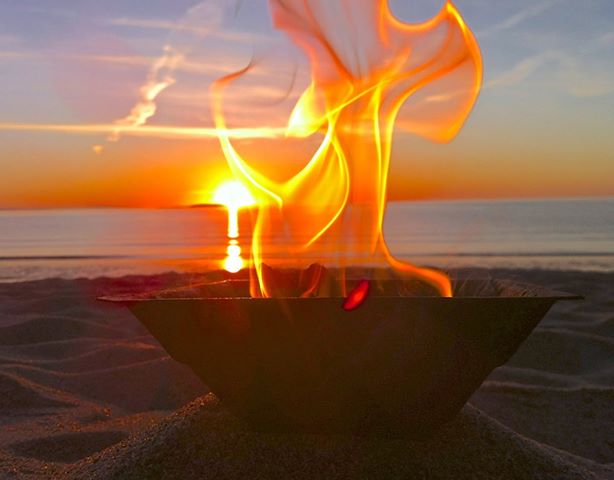 Written by Dr. Ann Ralles, Faculty Advisor for the Arks of Fire Initiative at NewEarth University’s School of Socio-Economics & Ecology

Agnihotra, the ancient Vedic spiritual technology that is being resurrected today, is proven to benefit agriculture, health and air quality. Studies also show a sharp reduction in harmful micro-organisms, and radio-activity within Agnihotra’s area of influence [from 40 to 200 acres].

Briefly, Agnihotra is a small fire built in an inverted copper pyramid with bio-electrically dense materials and precisely timed to sunrise and sunset. For a more thorough investigation of Agnihotra and its effects please go to Arksoffire.com.

How fascinating that such mundane materials burned in a simple vessel can have such a profoundly beneficial influence! Our ancestors intuitively saw how to create a radiant bio-active field in an extremely low tech way, making Agnihotra one of the most powerful tools available to each of us to heal our beloved planet.

What is the role of the copper pyramid in this seemingly magical process? Are there similarities between the Agnihotra pyramid and the Great Pyramid of Giza or the Mayan pyramids?

Fire in the Middle

Pyramid is translated from the Greek as “fire in the middle’; pyr meaning fire and mid meaning middle. I would suggest this does not refer to the actual flame but the implosive process, the “fire that does not consume”.

Dan Winter, author of Fractal Conjugate Space Time, describes the mechanism of Agnihotra’s implosive effects thusly [my paraphrasing]; at the exact sunrise /set angle, the very long wave of the sun [a pressure or infrasound wave] strikes the copper pyramid triggering the marriage [conjugation] of the burning plasma waves into implosive collapse [aka fusion], becoming self-organizing, negentropic [moving towards order], sucking in massive amounts of electrons and subsequently radiating into a bio-active, fractal electrical field.

The Phi-shaped angulation of the pyramid greases the wheels for the initial collapse with required precision. Could the pyramid builders have known about this science? Were they merely looking to house the bodies of egotistical pharaohs and priests?

This stepped-form with exacting Phi [Golden Ratio] geometry is the resonant waveform guide for implosion. The pyramid shape initiates the implosive collapse with precision ratcheting into infinity and spiraling back out, radiating the massive bio-active electric field.

Sound of the Sun

The Vedic tradition, which gave us Agnihotra, holds that the sound of the sun is OM, the Great Mantra that contains every other mantra. The NASA Solar Observance Laboratory recorded the actual sound of the sun and compressed forty days into the following recording, audible to the human ear. Although this is a rough, mechanical way to treat the sacred voice of the sun, many people hear the OM sound in the first part of the recording. Judge for yourself:

For an explanation of how sound waves can travel faster than the speed of light, see here: sound pulses

Finally, here is a short startling video showing the self-organizing [life-enhancing] influence of the Great Mantra chanted by a founder of sound healing music, Dr. Steven Halpern, while he was in the Great Pyramid of Giza: https://youtu.be/Yw13EAX3cZk

In the grains of sand we see the hallmarks of implosion in the Great pyramid: self-organization and negentropy. The Om mantra, as a pressure wave, initiates the implosive, non-destructive collapse while the pyramids shape guides the waveforms into the perfect Golden ratio compression.

We can infer that something similar happens in the Agnihotra pyramid and that the negentropic, self-organizing, life-enhancing benefits are radiated, in grace, to the surroundings.