An Alchemical Understanding Of The Relationship Between Space And Time 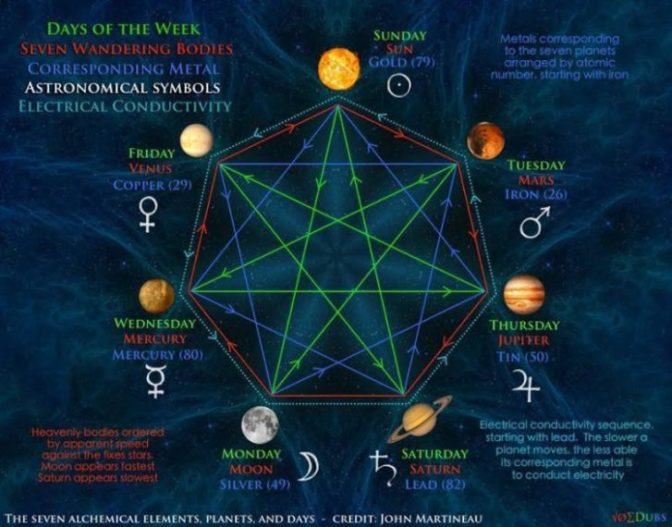 Our lives are dictated by cycles and patterns. We can apply metaphor to discover the poetic nature of the universe, although the actual pattern of nature lies at the core of our universal truth. The more we observe the patterns, the more we reveal the wisdom of creation.

Discovering the great coincidences within the various systems may lead us to a greater realization of the origin and order we’ve had in place from the dawn of civilization. Are there fundamental relationships between space, time, and life which we’ve forgotten, and eventually misunderstood? Was this information hidden so man could further disassociate humanity from nature and the animal kingdom?
In the image below, we can further explore these concepts.
These ideas are from, ” A Little Book of Coincidence in the Solar System” by John Martineau.

The following text was rewritten by Jain 108.

SEVEN: Alchemical Elements, Days of the Week, and Visible Planets

Have you ever wondered why the 7 Days of the Week appear in a certain order?

First of all, our ancient seers knew the speed of the 7 visible planets,
because they arranged them in the shape of a Heptagon or 7-sided polygon shape (shown in red).
Start with the Moon, which appears to move the fastest, and move upwards and towards the left to Mercury then Venus, then Sun, then Mars, then Jupiter and then Saturn.

To get the order of the Days of the Week that we have chanted since young children, again starting with Monday the Moon, travel upwards towards your right to get to Tuesday Mars (the green lines) and viola, you create the 7-Pointed Star or Heptagram. That is why each day of the week corresponds to a planetary energy:
The Moon (Monday), Mars (Tuesday), Mercury (Wednesday), Jupiter (Thursday), Venus (Friday), Saturn (Saturday), the Sun (Sunday).

Then there is more science to this cosmogram:
Our Alchemist forbears even knew the Atomic Weights (AW) of the metals that correspond to each planet according to this pattern of the days of the week, to form another form of the Heptagram Star shown in blue. Start with the lightest one: Iron (AW=26, relating to Mars and Tuesday), then Copper (AW=29 = Venus =Friday), then Silver (AW=49 = Moon = Monday), then Tin (AW=50 = Jupiter =Thursday), then Gold (AW=79 = Sun = Sunday), then Mercury (AW=80 = Mercury = Wednesday), then finally Lead (AW=82 = Saturn = Saturday).

In the Kybalion (A Study of The Hermetic Philosophy of Ancient Egypt and Greece by 3 Initiates), it says:
“The Principles of Truth are Seven; he who knows these, understandingly, possesses the Magic Key before whose touch all the Doors of the Temple fly open.”