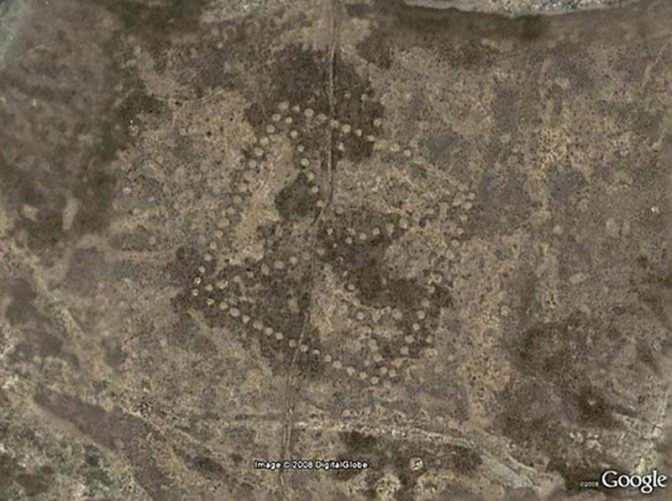 (Era of Wisdom) NASA recently turned their attention to a set of ancient earthworks discovered in Kazakhstan, the oldest of which are believed to date back 8,000 years. Their complexity and sophistication have people scratching their heads, and they serve as potential evidence that our history is nothing like we think.

According to the New York Times, Kazakh archaeology enthusiast Dmitriy Dey discovered the earthworks via Google Earth in 2007, and now NASA is interested in capturing photos from the International Space Station.

“High in the skies over Kazakhstan, space-age technology has revealed an ancient mystery on the ground.

“Satellite pictures of a remote and treeless northern steppe reveal colossal earthworks — geometric figures of squares, crosses, lines and rings the size of several football fields, recognizable only from the air and the oldest estimated at 8,000 years old.”

“The largest, near a Neolithic settlement, is a giant square of 101 raised mounds, its opposite corners connected by a diagonal cross, covering more terrain than the Great Pyramid of Cheops. Another is a kind of three-limbed swastika, its arms ending in zigzags bent counterclockwise.” (1)

There are over two hundred of the “Steppe Geoglyphs” as they’re being called, and they haven’t been studied until now.

“Described last year at an archaeology conference in Istanbul as unique and previously unstudied, the earthworks, in the Turgai region of northern Kazakhstan, number at least 260 — mounds, trenches and ramparts — arrayed in five basic shapes.

“Spotted on Google Earth in 2007 by a Kazakh economist and archaeology enthusiast, Dmitriy Dey, the so-called Steppe Geoglyphs remain deeply puzzling and largely unknown to the outside world.” (2)

NASA recently showed their interest by releasing two satellite photographs of the Steppe Geoglyphs, and they plan to take pictures from the International Space Station.

“Two weeks ago, in the biggest sign so far of official interest in investigating the sites, NASA released clear satellite photographs of some of the figures from about 430 miles up.

“‘I’ve never seen anything like this; I found it remarkable,’ said Compton J. Tucker, a senior biospheric scientist for NASA in Washington who provided the archived images, taken by the satellite contractor DigitalGlobe, to Mr. Dey and The New York Times.

“This week, NASA put space photography of the region on a task list for astronauts in the International Space Station. “‘It may take some time for the crew to take imagery of your site since we are under the mercy of sun elevation angles, weather constraints and crew schedule,’ Melissa Higgins of Mission Operations emailed Dr. LaPorte.” (3)

People are excited that NASA is showing interest because they think the research will help figure out the origins of these earthworks, and how they relate to our ancient history; but I’m skeptical.

NASA is well-known in certain alternative communities for suppressing evidence of things they don’t want the public to know. People believe their research is censored if they discover something the higher-ups don’t want to get out.

While examples, facts, and evidence to support the claim of suppressed information should be presented in making a case for that, NASA’s sense of priority is exemplified by one glaringly obvious fact; they are an agency of the US government.

Most people don’t know that these earthworks are just the tip of the iceberg. They aren’t the only things that suggest we don’t know our true history, and they aren’t the only things that people know nothing about. Plenty of ancient tools and devices have been discovered that couldn’t have possibly existed in their time according to what we were taught in school, and they force us to rethink everything we thought we knew about our history.

Take, for example, a 500 million year old hammer that was discovered in the 1930s. Graham Pick at MaltaNow.com explains.

In June 1936 Max Hahn and his wife Emma were on a walk beside a waterfall near to London, Texas, when they noticed a rock with wood protruding from its core. They decided to take the oddity home and later cracked it open with a hammer and a chisel. What they found within shocked the archaeological and scientific community. Embedded in the rock was what appeared to be some type of ancient man made hammer.

“A half billion year old hammer embedded in rock that formed 400 million years ago.” (4)

If that doesn’t get you thinking, then how about a clay figurine that was discovered to be “at least” 15 million years old?

“In 1889 near Nampa, Idaho, whilst workers were boring an artesian well, a small figurine made of baked clay was extracted from a depth of 320 feet. To reach this depth the workers had to cut through fifteen feet of basalt lava and many other strata below that. That in itself does not seem remarkable, until one considers that the very top layer of lava has been dated to at least 15 million years old!

“It is currently accepted by science and geology that coal is a by-product of decaying vegetation. The vegetation becomes buried over time and is covered with sediment. That sediment eventually fossilizes and becomes rock. This natural process of coal formation takes up to 400 million years to accomplish.

“Anything that is found in lumps of coal or in coal seams during mining, had to have been placed or dropped into the vegetation before it was buried in sediment.” (5)

How about a hand-crafted bell that was discovered in a “300 million year old lump of coal”?

“In 1944, as a ten year old boy, Newton Anderson, dropped a lump of coal in his basement and it broke in half as it hit the floor. What he discovered inside defies explanation based upon current scientific orthodoxy.

“Inside the coal was a hand crafted brass alloy bell with an iron clapper and sculptured handle.

“When an analysis was carried out it was discovered that the bell was made from an unusual mix of metals, different from any known modern alloy production (including copper, zinc, tin, arsenic, iodine, and selenium).

There are apparently plenty more examples of ancient artifacts being discovered in broken-up coal. Graham describes four of them.

“The Morrisonville, Illinois Times, on June 11, 1891, reported how Mrs. S. W. Culp found a circular shaped eight-carat gold chain, about 10 inches long, embedded in a lump of coal after she broke it apart to put in her scuttle. The chain was described as ‘antique’ and of ‘quaint workmanship.’

“Displayed in a museum at Glen Rose, Texas, is a cast iron pot reportedly found in a large lump of coal in 1912 by a worker feeding coal into the furnace of a power plant. When he split open the coal the worker said the pot fell out, leaving its impression in the coal.

“Yet another report found in the Epoch Times told of a Colorado rancher who in the 1800’s broke open a lump of coal, dug from a vein some 300 feet below the surface, and discovered a “strange-looking iron thimble.”

“The Salzburg Cube is yet another ancient puzzle found by a worker named Reidl, in an Austrian foundry in 1885. Like the others, this man broke open a block of coal and found a metal cube embedded inside. Recent analysis established the object was of forged iron and obviously hand crafted. The coal it was found in was millions of years old.” (7)

Apparently, this stuff is pretty common.

“These extraordinary discoveries although bizarre, are not unique or even uncommon. There are literally thousands of them collecting dust, locked away from public scrutiny in the vaults of museums throughout the world.” (8)

I know NASA isn’t directly affiliated with ancient artifacts, but they work for the same people who don’t want us to know our real history. The fact that these amazing discoveries are locked away gives me less assurance that any organization affiliated with the government would actually want to do something with the discovery of the Steppe Geoglyphs, and somebody somewhere probably already knows the truth about them.

Instead of being widely observed as contradictions to mainstream history, these things are given brief attention in the media before people move on to the next political debate or celebrity scandal.

There’s a reason the media doesn’t give our ancient history much attention, and their owners don’t want people to know what’s really been going on. They want people to be slightly interested in these kinds of discoveries, which is why NASA’s a part of it and mainstream news outlets cover it, but their interest is only skin deep.

For a brief moment, they get to appear as if they aren’t suppressing this stuff or refusing to explore it all in depth. They maintain the illusion that they’re genuinely interested in figuring out our history, but throughout the research, genuine discoveries that could really open people’s minds are hidden.

We’re given little glimpses, but we’ll never know the truth unless we do our own research and draw our own conclusions. Until we do, we’re forced to put up with the little bits of “truth” the mainstream feeds us.

I’ll gladly eat my words if NASA takes this discovery somewhere, but something tells me we won’t hear much more about it unless we hear from alternative news outlets. Suppression will start at the first sign of a real discovery, and concerned, courageous employees will have to blow the whistle just to get the truth out.

If you do decide to do the research, prepare to be dumbfounded. Nothing is as it seems, and this can especially be said about our history and the extent to which the power structures go to hide it.