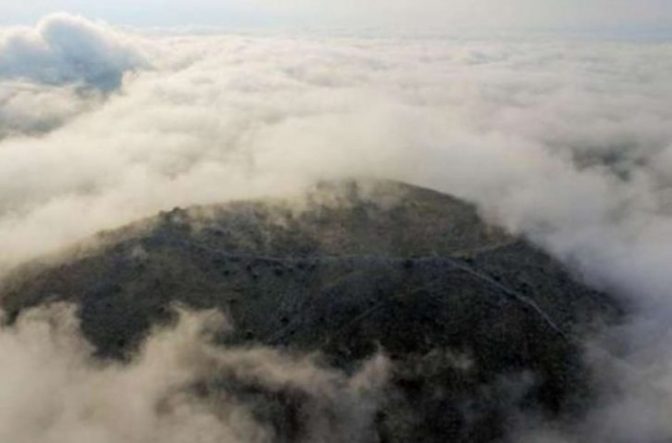 The notion of “what you see is what you get” certainly doesn’t apply to the just-discovered underground city hidden beneath a hill on the great Thessalian plains of Greece.

A team of University of Gothenburg and University of Bournemouth archaeologists from VLAP, a collaboration between the Ephorate of Antiquities of Karditsa and the Swedish Institute at Athens, came across the remains of the lost city, which resides about 190 miles north of Athens, while exploring the ruins of a village called Vlochós on the Strongilovoúni hill.

Dating back some 2,500 years, the city is mostly buried beneath the hill, hence why it took so long for the researchers to come across it.

The walls of the city struck the researcher with the most awe, as many of the preserved fortifications remained at points still 2.5 m. high, while the lower slopes below the hill revealed “clear indications of being the location of an extensive urban settlement, now covered by silt and sediment from the nearby river Enipeas.”

The University of Gothenburg researchers found the remains of towers, walls, and city gates of an ancient town that had once been thought to be nothing more than a backwater, mostly because no other artifacts could be found on the ground. But upon closer inspection, the team realized they were actually standing on something much more mysterious than once imagined: the site of a once lively city.

“A colleague and I came across the site in connection with another project last year, and we realized the great potential right away. The fact that nobody has never explored the hill before is a mystery,” said lead fieldworker Robin Rönnlund, a PhD student in Classical Archaeology and Ancient History at the University of Gothenburg.

“What used to be considered remains of some irrelevant settlement on a hill can now be upgraded to remains of a city of higher significance than previously thought, and this after only one season.

“’We found a town square and a street grid that indicate that we are dealing with quite a large city. The area inside the city wall measures over 40 hectares [99 acres],” he continued.

“We also found ancient pottery and coins that can help to date the city. Our oldest finds are from around 500 BC, but the city seems to have flourished mainly from the fourth to the third century BC before it was abandoned for some reason, maybe in connection with the Roman conquest of the area.”

But rather than dig up the surrounding turf to excavate the city’s remains, researchers have taken a step back, and devised a plan to use radar for viewing the underground artifacts so as not to cause unnecessary damage.

Rönnlund thinks the Swedish-Greek project can expose valuable clues about what happened during this violent period in Greek history.

“Very little is known about ancient cities in the region, and many researchers have previously believed that western Thessaly was somewhat of a backwater during Antiquity. Our project therefore fills an important gap in the knowledge about the area and shows that a lot remains to be discovered in the Greek soil.”

It’s time to move away from Facebook if you want to stay informed. You can keep up with all of our stories by clicking here.