Announcing the First Case of the ITNJ

The first case accepted for hearing before the ITNJ is listed as Unified Common Law Grand Jury of Southern Africa (‘UZA’) v Republic of South Africa, and Constitutional Court of South Africa. 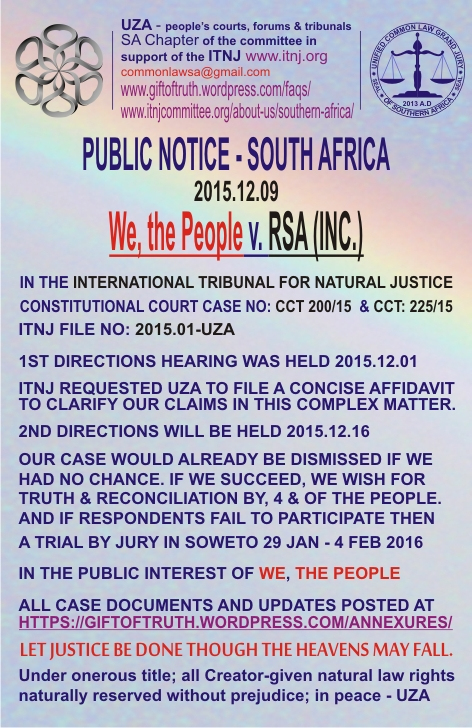 Directions Hearings (preliminary hearings) were held on 1 December and 16 December, 2015.  Summaries of these hearings are posted here, and links to the audio and video recordings will be published in the next issue of The Sovereign Voice.

Background of the Case

Our story started in June of 2013 already when we served our first notices on the Constitutional Court of South Africa for not acting in accordance with the Bill of Rights which is at the centre stage of our Republic which abides by constitutional supremacy;

any act or court decision not in the spirit, purport, objects and interpretation of the Bill of Rights is un-constitutional and therefore null and void from the beginning; more info on our ongoing saga is to be found at:

Details of the Case

This is the case of “We, the People” v. our public servants who made a solemn oath to serve and protect we, the people; instead they are acting as agents for a CORPORATE REPUBLIC OF SOUTH AFRICA in the interests of foreign corporations and in the interest of the foreign shareholders which is un-constitutional! Anything un-constitutional is null and void, back to the beginning of the fraud. In the words of Ronnie Kasrils: “Our people were sold down the river.”

Our court case will reveal the truth.