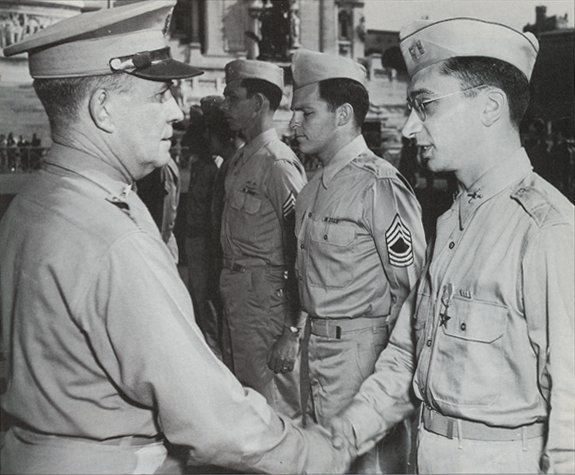 Colonel Phillip Corso, Sr. was an Army intelligence officer who served on Eisenhower’s National Security Council. Following his 21-year military career, he served as a military analyst. He made a public figure of himself by acknowledging that he personally witnessed deceased extraterrestrials from the Roswell crash.

In the following video, he discusses this initial encounter, as well as having seen UFOs travel at 4,000 miles an hour on radar. He discusses how, during his employment in R&D, he was given fragments of extraterrestrial technologies from various crashes. His job was to seed industry with these technologies, informing them that they were from earthly foreign sources.

Many conspiracy theorists call the Roswell incident to be one of the most obvious pieces of evidence covered up by the U.S. government regarding extra-terrestrial life on Earth. It is accounts like Corso’s that fuel such thoughts.

Corso describes the deceased aliens as having a brain completely different than that of humans. They had no nose or mouth, no digestive system, and no sex organs. “They are more humanoid beings that anything else,” he says in the video. “Their spaceship is composed of durable metals and are biological in nature; nothing like we every seen.”

Now in his 80s, he attributes the burying of the information to fear, but says we can no longer rely on that, because it’s a distant reality.

“People want to know the truth,” he says, urging that the young people of America have a right to know. He says, contrary to popular belief, they won’t panic. “They aren’t going to pull their hair out, they want to hear this.”

Throughout the interview, it seems Corso is beyond aggravation for what could have been, mostly because he has come to terms with the fact that, when his UFO sightings occurred, he lived in a time when people were more accepting of what the government told, and didn’t tell them. Today? not so much.

“They are sick of being lied to,” he says. And goes on to say that, because the government is so big and so vast, if you leave important information alone, it will cover itself up. This is perhaps the most notable point of his interview. In a day and age where there is so much changing so quickly, yet people are finally beginning to have a voice, question the government, politics, and so much more, we need to take advantage of this newfound strength, boldness and individuality and use it to create communities that value the truth.

Colonel Philip Corso, author of the book The Day After Roswell, which discusses his revelations concerning his role in a classified program to seed extraterrestrial technologies into the private sector, is one of the most vital whistleblowers to date. Give this interview, and many more of his, a watch.