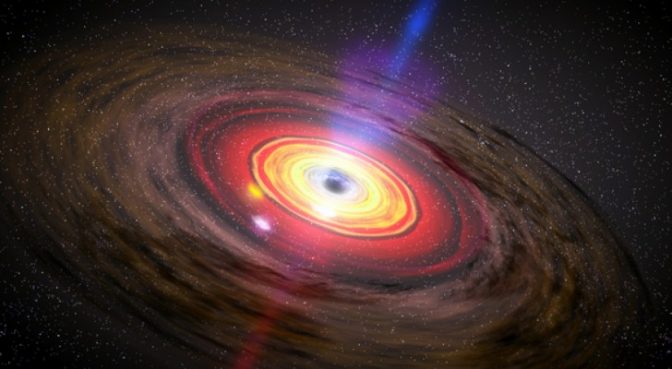 The current theory about galaxy evolution states that galaxies contain black holes at their core which make up about 0.5% of the galaxy’s total mass.

However, this theory was recently challenged with the discovery of a super massive central galactic black hole, named CID-947, which made up 10% of its galaxy’s mass, stirring up questions about the current theory of galactic evolution, IFL Science reports.

The 11.7-billion-year-old black hole seems to have grown faster than its host galaxy. Forming two billion years after the Big Bang, it is among the largest black holes ever found, with a mass of about seven billion times that of the Sun.

Lead author on the study, Benny Trakhtenbrot from ETH Zurich’s Institute for Astronomy, said in a statement that it was a “gigantic black hole within a normal-size galaxy,” far exceeding the size expected for black holes in galaxies. Speaking to IFLS, he added that “the black hole had to grow first, and the galaxy is experiencing its period of maximum growth later.”

That the galaxy was still forming stars and continuing to grow was surprising, as it challenges theories that the radiation emitted by expanding black holes would stunt the creation of new stars.

It may be that the galaxy is a precursor to bigger and more extreme galaxies seen in the universe, but its growth would still upend existing theories about galaxy evolution. According to Space.com, the discovery may support the theory that black holes grew incredibly rapidly in the early universe, as the cosmos was smaller and denser.

The discovery, published in the journal Science, was made using the Hawaii-based Keck Observatory’s new MOSFIRE instrument. It came as somewhat of a surprise though, as the team was performing a “routine” search for black holes and had not expected to find anything so exotic.

“This project specifically targeted moderate black holes that inhabit typical galaxies today,” said Claudia Megan Urry, Yale’s Israel Munson professor of astrophysics and co-author of the study, in a statement. “It was quite a shock to see such a ginormous black hole in such a deep field.”