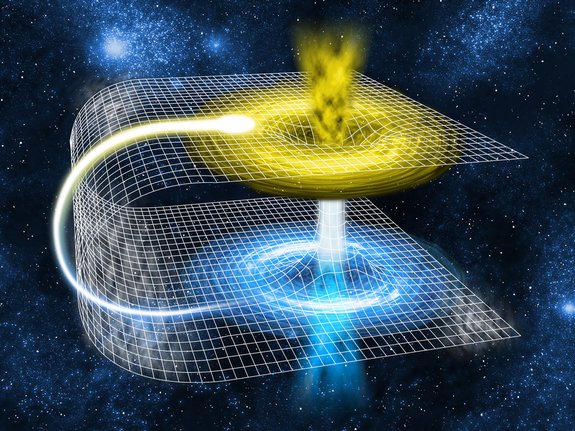 Time travel is one of those concepts most often left for fantasy novels, movies, and long conversations about the what-ifs of life. But for many researchers, it’s been a plausible reality for decades.

In 2014, a group of scientists from the University of Queensland, Australia, simulated how time-travelling photons might behave. They discovered that, at the quantum level, the grandfather paradox, the phenomenon which makes time travel impossible, can actually be resolved.

Their research, titled “Experimental simulation of closed timelike curves,” was published in the latest issue of Nature Communications.

In their study, the researchers use photons, or single particles of light, to replicate quantum particles travelling back through time. Upon analyzing the particles’ behaviour, the scientists realized something strange was happening.

“The properties of quantum particles are ‘fuzzy’ or uncertain to start with, so this gives them enough wiggle room to avoid inconsistent time travel situations,” explained co-author Professor Timothy Ralph. “Our study provides insights into where and how nature might behave differently from what our theories predict.”

For the simulation, the scientists studied how the behaviour of a photon travelling through time communicated with its original version.
The Daily Mail reported:

In their experiment they made use of the closely related, fictitious, case where the photon travels through normal space-time and interacts with another photon that is stuck in a time-travelling loop through a wormhole, known as a closed timelike curve (CTC).

The grandfather paradox says that, should a time traveller go back in time, he would mistakenly prevent his grandparents from meeting, and therefore prevent his own birth. But, if he had never been born, there is no way he could have travelled back in time to begin with.

Albert Einstein’s special and general relativity theories have led physicists to believe that time travel could be possible. Special relativity says that space and time are aspects of the same thing, called the space-time continuum. It says that time can speed up or slow down relative to how fast you are moving, relative to something else. General relativity claims that travelling backwards in time relies on a space-time path, such as a CTC that returns to the starting point in space, but comes at an earlier time.

In 1991, it was predicated that quantum mechanics could bypass some of the paradoxes that Einstein’s theory of relativity established, with quantum particles acting nearly outside the domain of physics.

“The question of time travel features at the interface between two of our most successful yet incompatible physical theories – Einstein’s general relativity and quantum mechanics,” explained lead author Martin Ringbauer, a PhD student at UQ’s School of Mathematics and Physics. “Einstein’s theory describes the world at the very large scale of stars and galaxies, while quantum mechanics is an excellent description of the world at the very small scale of atoms and molecules.”

In 2012, physicists David Wineland and Serge Haroche shared the Nobel Prize in Physics for demonstrating how “quantum weirdness” could not only exist at the subatomic micro-world level, but also show itself in the macro-world.

Not everyone agrees time travel is possible, however. Stephen Hawking, for instance, revealed in a BBC documentary that it simply can’t happen. But regardless of the physical problems and paradoxes, such advances in quantum theories open the doors to a better understanding of potential ways to overcome time travel paradoxes.

Welcome to the world of Quantum physics, where pioneering Physicist Niels Bohr once said, “if quantum mechanics hasn’t profoundly shocked you, you haven’t understood it yet.”

“We choose to examine a phenomenon which is impossible, absolutely impossible, to explain in any classical way, and which has in it the heart of quantum mechanics. In reality, it contains the only mystery.” – Richard Feynman, a Nobel laureate of the twentieth century (Radin, Dean. Entangled Minds: Extrasensory Experiences In A Quantum Reality. New York, Paraview Pocket Books, 2006.)