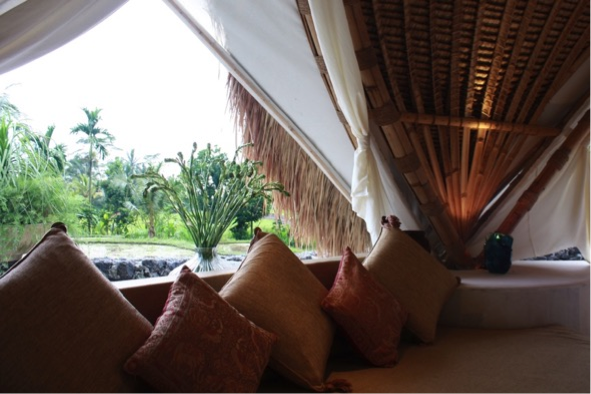 centers functioning primarily as an enhanced energy carrier. The angles created within a five-sided structure actualize one of the most powerful shapes for creating implosive fields. The Phi-ve Dome also creates a pent-pyramid that contains within it the dodecahedron geometry, bringing extraordinary energetic quality to the structure. In this sense we use the Phi-ve Dome structure to create a very transformative experience at the retreats.  Dodecahedron geometry specifically bears the essence of unification, change, alchemy and divinity through the element of Ether.

Due to their universal qualities, the domes can be effectively utilized in other spaces and in the spirit of functionality, these domes are very easy to install and are economically efficient. Using this concept it is also possible to create different configurations such as the Trishula dome which positions the domes in a pent grid while connecting the different configurations.

This structural concept consists of three reciprocal arches which serve to create a type of infinite loop that energetically connects with the earth. This spinning earth energy is similar to that of a coil. Two of these modules are built to overlap, creating the balance force composition that creates the main structural body of this concept. The hexagram that forms as a result can be used as a template to create multiple configurations from this hexagonal grid in order to provide different layouts thus increasing the flexibility of the Trishula for use as a living space.

In the art of Vastu, six-sided structures are considered to have a creative energetic quality. While this is

still a beneficial shape, it is not as energetic as the pentagonal structure that contains the golden mean. Hexagonal structures have an altogether different kind of alchemical property. An example in nature that represents the quality of

this energy is seen in the hexagonal structures of honeycombs that bees use to store honey.

This geometry acts as a dynamic isolator of charge. It does not produce any phase conjugation as does the five or ten-sided golden mean based structures but actually serves to store the charge produced from the dome shape created by the arches. Also, in some cases we can situate a pent layer capacitor as a small sculpture of the lotus dome that will increase the energetic quality of this space, therefore emulating the structural geometry of our cells whereby the exoskeleton structure is a hexagram and the DNA structure is a pent.

This concept is an example of bio-mimicry where we emulate the spiral growth pattern of a cell or plant. This design could be dedicated to a conference or workshop space but can also

function as a harmonious living space. Its geometry is drawn from the same module as the Trishula dome but in this case there is the obvious addition of the spiral element. The Nautilus is a three-sided structure similar to a tetrahedron, which is known as one of the fundamental geometries that make up the fabric of the universe. It is contained within the sixty-four tetrahedron grid and also in the vector equilibrium. The basic form uses the tetra as a base and top while containing two vortices to create a toroidal structure.

The Toroid is a variation of the same modular concept as the Nautilus Dome. In this case we configure the shape of a complete toroidal structure where the seed of life geometry is created within the center. This is made up of six petals which form a type of flower column structure that functions as a water collector. It also possesses a cone that serves as an energetic antenna, which can also function as a skylight. It is here that we also introduce a five-sided spin vortex sculpture.

This is held within the center of the Toroid to add an energetic implosive quality.

Within nature the torriod is found everywhere, as the fundamental energetic field created by all living organisms.  Torroidal forces are found in nature when dolphins and whales blow air bubbles, and in weather systems; the earth is said to have three torroidal shields that protect the magnetic feedback created by our polar existence.  A thriving human being has a healthy and in tact torroidal field.

The Lotus dome is inspired by the symbolic principle of the sacred lotus flower. It represents the flowering of human evolution, transitioning from a state of darkness to the light and unfolding of divine consciousness.

This geometry is based on the phi ratio and the number five, making it one of the most energetic structures of all those displayed here. It is created using the same principles as the Trishula Dome but it is also contains five-sided infinite loop. Additionally, the golden mean is present in all of its proportions, thus serving to greatly amplify the energetic environment.

Additionally, the lotus structure geometry situated in the top acts as a layer capacitor, emulating the growth process of a flower that grows from the inside to the outside. This creates different stages of generation as reflected in the fractals forms found in nature. This will add an extraordinary energetic quality to the space which already functions as an egg-dome shape type of capacitor. The lotus dome acts as a natural skylight, bringing in and harvesting light within the interior of the structure. The architecture of this dome also serves to create a passive system of ventilation where the air can enter by the doors gates and escape under the lotus petals, creating a constant current of healthy airflow.

This space will be dedicated to retreats, conference halls and other communal areas. It will be one of the most powerful sacred spaces built for the New Earth developments.

The concept geometry of the structure is based on the golden section and Vesica Piscis, the very same perfect, life supporting and life creating geometric code contained in the structure of a fractal golden mean progression.  The 3d dome shape, that emerges from the union of two spheres, enhances the principle of divine abundance in all the structural geometry.

The petal like structural design is made of  basalt tubes that  are connected to the water, they work as the cloud buster invention, by Wilhelm Reich, in this case the petal shapes have been use for aesthetics and shape energy enhancing purposes.  When open, the flower configuration generates a neg-entropic centripetal force, causing rain-fall and increasing vitality in the surrounding environment. The aperture of the device is also used to create different lighting conditions within the interior, adapting to the daily and seasonal cycles.