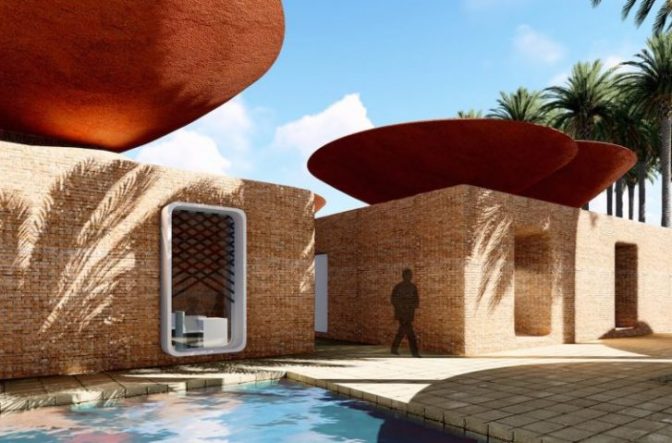 By 2025, an estimated 1.8 billion people will reside in areas around the world afflicted by water scarcity. And two-thirds of the world’s population will be living in water-stressed regions.

For many of us, it’s difficult to imagine life without access to abundant fresh water, and yet in some parts of the world, it is nearing reality. In the Middle East, for instance, issues like climate change, mass migration, environmental degradation, drought, and political instability are making diminishing water resources more apparent than ever. In Iran, water depletion is garnering severe attention.

The government has started to introduce programs promoting efficient water conservation and management, especially for agriculture, while also using social media to keep the public aware of the problem.

Precipitation in Iran is one-third of that of the world average, while evaporation is more than three times higher. The architects behind BMDesign Studios’s Concave Roof explained that the system is meant to  “help [make] even the smallest quantities of rain [flow down] the roof and eventually coalesce into bigger drops, just right for harvesting before they evaporate.”

The double-roof system incorporates a domed roof beneath a bowl-shaped catchment area. To encourage natural cooling, a concave roof is stacked atop a convex roof that allows for shade and wind movement between the roofs.

The bowl-shaped catchment area is steeply sloped to move raindrops towards a central collection point, where the rain is funneled into reservoirs. The reservoirs are placed between building walls to help regulate indoor temperatures. With this system, the architects estimate that 28 cubic meters of water could be harvested with just 923 square meters of a concave roof surface. BMDesign Studios’ vision also goes beyond the double-roof system and includes a massing design where the buildings and courtyards are sunken to promote natural cooling. The buildings would be organized around atriums to promote circulation and community.

The architects believe a concave roof like this could generate even the tiniest amount of rain flow off the roof, and eventually create drops big enough to harvest before they evaporate. The team behind the innovative design also suggests this technique could be applied to other areas with similar climates to Iran’s, and could be used to combat global warming by way of sustainable water sourcing.

“Some 65 per cent of Iran has an arid or hyper arid climate, and approximately 85 per cent of the country an arid, semi-arid or hyper arid environment,” explained the architects. “Unfortunately, every year, this zone expands. Big lakes like Lake Urmia have shrunk to a fraction of their size, gradually disappearing.” For cities with this issue, the result is forced water rationing and lost jobs for thousands of farmers.

Such a design shows the potential of alternative housing designs to make way for more sustainable futures that benefit both the environment and our heath.