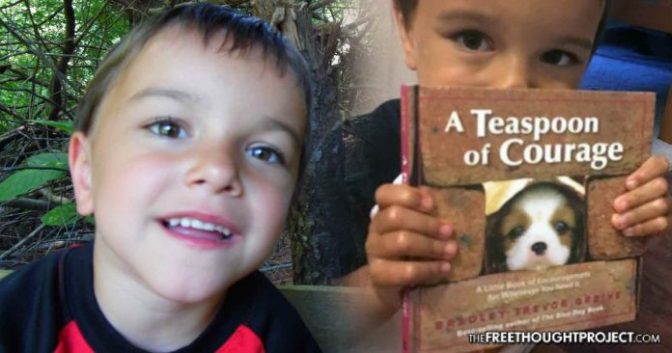 Bridgett Liquori lives in the Bible-belt state of Georgia, where the American flag is held as high as sweet tea and apple pie. For many years, Georgia has fought the failed war on drugs with reckless abandon, jailing thousands for marijuana crimes. But now, stories like Liquori’s are emerging, telling a different version of how marijuana can and should be used…as medicine.

Liquori’s son, unfortunately, was born with several incurable and painful conditions, which will stay with him throughout his life. Jackson was born with cerebral palsy, and a bone disease called chronic recurrent multifocal osteomyelitis (CRMO), an autoinflammatory bone disease. To say that CRMO is painful is an understatement.

Liquori wrote, prior to using cannabis, Jackson’s days were filled with, “pain, stiffness, inability to walk or painful walking, and a lack of energy.” But Liquori’s ability to manage Jackson’s pain changed one day when she set out, as any concerned mother would, to find some relief for her son. She wrote, “I never thought when I set out to find some relief for Jackson’s CP [chronic pain] that we would find a real safe treatment for his CRMO. One that would lead to him going off all prescriptions and thriving so well.”

She described that on June 5th, 2016, Jackson had his “last bad day.” That’s when she started giving her son cannabis oil. She detailed the preparation saying, “He is currently taking 39-45 drops of Copper Mountain Elixirs 12:1 AC/DC coconut oil tincture.”

The elixir produced the desired results which she says has now been documented by his physicians. In an update from October, she declared the effects of the cannabis oil to be nothing short of miraculous. “Today is October 19th 2016. As of today it has been 136 days pain free and moving!”

It didn’t take much either. She said he only needs 2 milliliters, three times a day, just a wee bit over a teaspoonful. Here’s a video she produced documenting his struggles both before and after giving Jackson cannabis oil.

For Liquori, the changes are noticeable. “As you can see from these videos Jackson has so much energy. He’s free from pain, stiff muscles, and he is thriving. Jackson has gone from being nearly non-mobile, miserable and in pain, to running down the streets laughing and enjoying his life every day,” she writes.

Liquori is now fighting a battle to make access to cannabis oil available to all residents of Georgia. She’s been very politically active since her son’s story became national headlines last year.

It’s time we stop depriving parents of a natural ability to help ease their children’s pain, by providing an option to pharmaceuticals which often come with a myriad of unpleasant side effects and arguably don’t work as well as cannabis.

Liquori recently spoke out at the Georgia State Capitol, encouraging legislatures to expand the list of qualifying conditions to include intractable pain, autism, and other illnesses.

TFTP spoke with Liquori to bring you first-hand testimony of the miraculous benefits of how one courageous mother is standing up to the establishment to bring her son the much-needed relief he so desperately needs and deserves.

Liquori says she’s still very fearful of the Department of Social Services (DSS) and their ability to remove Jackson from her home. She wrote, “I’ve had many issues with DSS in my past but I know for certain that if they were to step in and do something we would have a fighting chance.”

She says she’s ready if they want to pick a fight with her over her decision to give her son life improving natural medicine, even if it is currently legal. “I have thoroughly documented everything with my children. I have informed and gotten the support of my children’s doctors and have testified to the state House of Representatives, telling them I am illegally doing this and I plan to do so forever if needed.”

She said her arrest would catapult the issue forward. “I wish they would come and arrest me because that is what is needed to get these ridiculous laws changed. If more people spoke up and fought with us we would win.”

Liquori is planning a major demonstration for the next session at the Georgia State Capital. “I am organizing a legalization and safe access march for next session. We will come in numbers. We will not be quiet on this issue any longer. We are organizing a grassroots movement here in GA.”

To achieve those ends, the mother, who’s been an eye witness to the healing, restorative power of cannabis, plans on carpooling if that’s what it takes. Her goal is, “to bring people from the Southern and Western part of the state straight to the state capital and we plan to let them know we are not going away.”