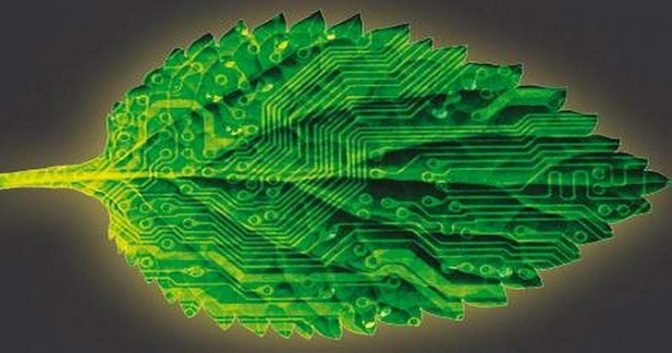 Last November, we reported that within 25 years humanity will undergo its greatest energy shift since the Industrial Revolution. New research by Bloomberg showed that wind and solar energy have reached a point of economic competitiveness where coal and natural gas will become increasingly marginalized.

We already have renewable energy for electricity generation, but fuel for transportation has been trickier. Oil has remained the most feasible fuel, despite its environmental and human health hazards and its role in global political instability.

However, soon we can finally say goodbye to oil, too, and with it the era of fossil fuels.

A breakthrough solar technology has just been announced that captures carbon dioxide and sunlight to produce burnable fuel.

“Researchers at the University of Illinois at Chicago have engineered a potentially game-changing solar cell that cheaply and efficiently converts atmospheric carbon dioxide directly into usable hydrocarbon fuel, using only sunlight for energy…

Unlike conventional solar cells, which convert sunlight into electricity that must be stored in heavy batteries, the new device essentially does the work of plants, converting atmospheric carbon dioxide into fuel, solving two crucial problems at once. A solar farm of such “artificial leaves” could remove significant amounts of carbon from the atmosphere and produce energy-dense fuel efficiently.”

The first “artificial leaf” was created last year that used sunlight and water to create fuel efficiently, although the fuel was hydrogen which is more difficult to store and transport than hydrocarbons. Still, it was a breakthrough in renewable energy and paved the way for this latest advancement.

The new artificial leaf produces “syngas” – a mixture of hydrogen gas and carbon monoxide – which can be burned directly or converted into diesel or other hydrocarbon fuels.

“The UIC artificial leaf consists of two silicon triple-junction photovoltaic cells of 18 square centimeters to harvest light; the tungsten diselenide and ionic liquid co-catalyst system on the cathode side; and cobalt oxide in potassium phosphate electrolyte on the anode side.

When light of 100 watts per square meter – about the average intensity reaching the Earth’s surface – energizes the cell, hydrogen and carbon monoxide gas bubble up from the cathode, while free oxygen and hydrogen ions are produced at the anode.”

The significance of this achievement should not be overlooked.

“The ability to turn CO2 into fuel at a cost comparable to a gallon of gasoline would render fossil fuels obsolete.”

With one technological breakthrough we can begin to close the chapter on fossil fuel dependence and all of the negativities it brings.

Energy and fuel will be made everywhere, locally, instead of having to depend on extraction from other regions that are often volatile. Centuries of air and water pollution from the burning of coal and oil will be drastically reduced, leaving ecosystems and human health in a healthier state.

Also, the fact that this artificial leaf captures carbon dioxide could be a major solution to slowing the rate of global warming. Atmospheric carbon dioxide has risen from about 280 parts per million (ppm) in 1750, the dawn of the Industrial Age, to over 400 ppm today — a rate only matched by asteroid impacts in known geologic history.

“Instead of producing energy in an unsustainable one-way route from fossil fuels to greenhouse gas, we can now reverse the process and recycle atmospheric carbon into fuel using sunlight,” said Amin Salehi-Khojin, senior author on the study. They say solar farms of artificial leaves could remove large amounts of CO2 from the atmosphere.

In his 2007 bestselling book titled A Thousand Barrels a Second, author Peter Tertzakian described the various energy transitions that humans have undergone during our tumultuous history. He predicted that, due to spiraling pressures, oil’s dominant role in the global energy supply will soon be upended, although no “magic bullet” existed to smooth the adjustment process.

The artificial leaf appears to be that magic bullet.