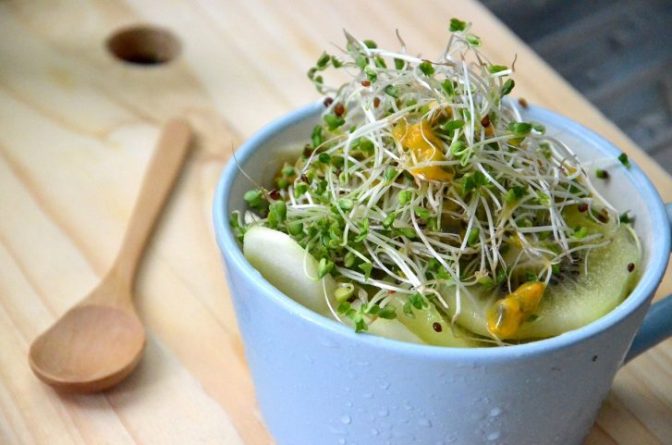 (Naturalhealth365) Natural health experts have long known that certain foods, like broccoli sprouts can help protect against breast cancer – and that the natural compounds found in many superfoods can help combat chronic disease conditions. Now, a groundbreaking study adds an encouraging new twist to the healing power of healthy nutrition.

Estrogen receptor-negative breast cancers are the most deadly

Biology professor Trygve Tollefsbol, Ph.D., D.O. – a senior scientist with the Comprehensive Cancer Center at University of Alabama at Birmingham – teamed with Yuanyuan Li, M.D., Ph.D., a research assistant professor of biology, to conduct the study.

Researchers noted that the nutrients actually made epigenetic changes in the ER gene regulatory region, converting the tumors in the mice from ER-negative to ER-positive cancers. The ER-positive cancers were then able to be treated with tamoxifen.

The team called for clinical trials to explore the potential of the broccoli sprouts/green tea combination – in the hope that it can provide more effective treatment options for women either predisposed to, or afflicted with, this lethal form of cancer.

Cruciferous vegetables such as broccoli sprouts, cabbage and Brussels sprouts are rich in glucosinolates, which are converted by the body into sulphoraphane, a cancer-fighting compound. Sulphoraphane is currently the subject of intensive research into its mechanisms against cancer.

In a just-published article in Cancer Letters, the authors noted that high levels of dietary sulphoraphane have been linked to a lower risk of breast cancer.

That fact, however, wasn’t the biggest news.

The authors cited a study showing that sulphoraphane potentiates the cancer-killing effects of taxane drugs (such as Taxol and Taxotere) by reducing the breast cancer stem cell populations. Mice treated with both Taxotere and sulphoraphane experienced more significant reductions in tumor volume than mice treated only with Taxotere.

The researchers reported that sulphoraphane achieves its effect by reducing inflammation, inhibiting the growth of both ER-negative and ER-positive breast cancer cells, and causing cancer cell apoptosis, or programmed cell death.

As for green tea, numerous studies support the beverage’s ability to protect against cancer. The secret weapon in green tea is its high number of antioxidant compounds called catechins. The most powerful – as well as the most abundant – catechin is known as EGCG, or epigallocatechin-3- gallate.

In a 2016 review published in Nutrients, researchers noted that green tea can help protect cell DNA from oxidative damage that could lead to cancer. Green tea has also been found to interfere with angiogenesis – the growth of new blood vessels to feed tumors.

Broccoli sprouts are a treasure trove of cancer-fighting sulphoraphane

Unlike some cancer-fighting plant compounds, sulphoraphane can be obtained in significant amounts from dietary intake. All cruciferous vegetables (such as cabbage, kale and Brussels sprouts) are good sources of sulphoraphane, but broccoli sprouts are the best – by far.

For maximum benefit, these vegetables should be organic and fresh – and eaten uncooked or lightly steamed. Prolonged cooking can deplete a helpful compound called myrosinase, which enables glucosinolates to convert to sulphoraphane.

As many cruciferous vegetable benefits are caused by the interaction of multiple plant compounds, natural health experts recommend against enhanced extracts.

Many studies have shown that diet plays a vital role in warding off cancer. This encouraging research goes a step farther, demonstrating the ability of healthy dietary choices to “flip the script” – positively affecting gene expression and improving the prognosis of a deadly disease.