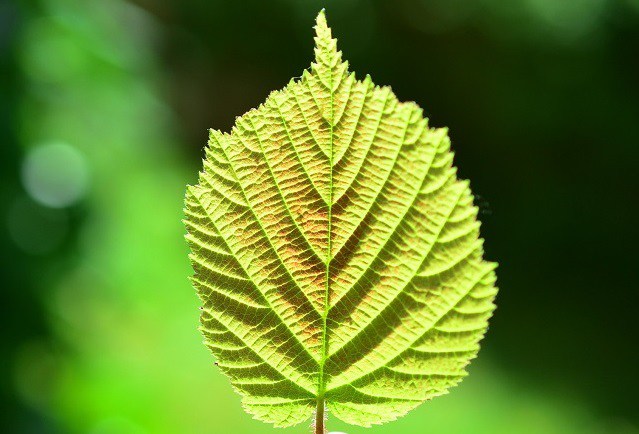 Hydrogen has come into the spotlight for its ability to provide clean fuel source for vehicles. Referred to as “fuel cell vehicles,” they use hydrogen gas to power an electric motor. This is different than conventional vehicles that run on gasoline or diesel, because the fuel cells cars and trucks use a combination of hydrogen and oxygen to product electricity to run the motor.

Hydrogen is typically made with natural gas, which is less polluting than oil, but isn’t completely clean. So why not try to make it cleaner? That was the goal of the University of Cambridge scientists who found a way to make the fuel source using sunlight and biomass like leaves.

To begin, the researchers created clean hydrogen with biomass by suspending the biomass in alkaline water and then adding catalytic nanoparticles. The components were put in light mimicking the sun in the lab, where chemical reactions unfolded, allowing lignocellulose, which is a part of plant biomass, to produce hydrogen. This event is called a photocatalytic conversion process.

Joint lead author Dr. Moritz Kuehnel, from the Department of Chemistry at the University of Cambridge, explains:

Lignocellulose is nature’s equivalent to armoured concrete. It consists of strong, highly crystalline cellulose fibres, that are interwoven with lignin and hemicellulose which act as a glue. This rigid structure has evolved to give plants and trees mechanical stability and protect them from degradation, and makes chemical utilisation of lignocellulose so challenging.

Up until this point, in order to turn lignocellulose into hydrogen, scientists needed high temperatures in a gasification process. The Cambridge scientists relied on the sunlight instead:

There’s a lot of chemical energy stored in raw biomass, but it’s unrefined, so you can’t expect it to work in complicated machinery, such as a car engine. Our system is able to convert the long, messy structures that make up biomass into hydrogen gas, which is much more useful. We have specifically designed a combination of catalyst and solution that allows this transformation to occur using sunlight as a source of energy. With this in place we can simply add organic matter to the system and then, provided it’s a sunny day, produce hydrogen fuel.

Our sunlight-powered technology is exciting as it enables the production of clean hydrogen from unprocessed biomass under ambient conditions. We see it as a new and viable alternative to high temperature gasification and other renewable means of hydrogen production. Future development can be envisioned at any scale, from small scale devices for off-grid applications to industrial-scale plants.

A United Kingdom patent application has been filed, while discussions regarding a possible commercial partnership are underway.

The study’s results provide a positive glimpse at what the future may hold if scientists focus on finding cleaner ways to advance the world we live in. In a time when natural resources are declining and waste products accumulating,   using waste for energy may prove to be the most reliable, sustainable, and efficient route for both governments and businesses to follow.

It will be interesting to see how their findings affect fuel sources for vehicles.