Can Agnihotra Save the Honeybee? 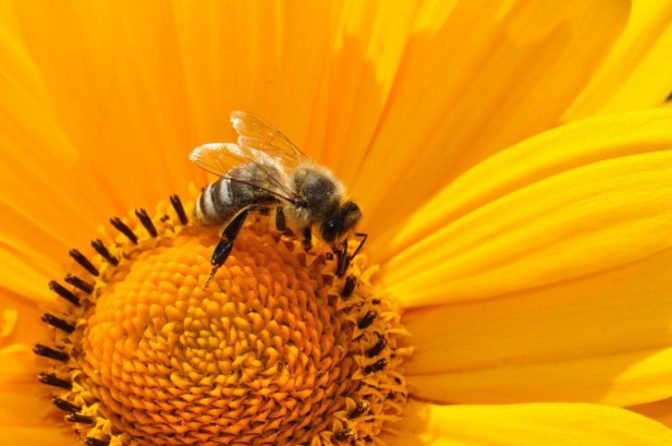 Author’s preface: Agnihotra and Beekeeping happen to share a dear and sacred place in my heart. As long-time apiarists, my husband and I became very disheartened when we began to see our beloved hives succumb to high rates of winter kill. Every time we would check the hives and find a dead or missing hive, it felt like the loss of a dear companion. When we began regular Agnihotra practice three years ago, we didn’t consider the effect it might have on the bees. However, near the end of our third winter with Agnihotra, the feelings of helplessness are being replaced with an empowering confidence that we can, largely, provide protection for our hives and help them over-winter in good health.

In this short article, rather than claiming proof that Agnihotra can save the Bees, I would like to present enough evidence of this possibility that would be sufficient to justify further scientific controlled study to this effect.

Humans and honeybees have evolved together for thousands of years. A rock painting in Spain, dated 8,000 years old, depicts a man foraging honey from a wild hive. Ancient Egyptian tomb paintings are positive records of honey being harvested from a man-made mud hive. These drawings are at least 4,000 years old, the same age as the oldest actual hive located in Greece.

In the western world, the significance of honey and wax can hardly be fathomed. Sugar, which came from the South Pacific, was not available in Europe until 700 years ago, so honey was the only concentrated sweet. [Sugar beets are a more recent development.] Wax was used to provide light, water-proof cloth and much more. Honey and propolis [resin-like glue for the hive] were vital medicines.

Today we enjoy not only these marvelous gifts, but depend on the honeybee commercially to pollinate a good portion of our food products.

HARD TIMES for the HIVE

But, as you probably know, our friend, the honeybee, is struggling to survive. Parasites and disease have ravaged bee populations and Colony Collapse Disorder has devastated hives. Colony Collapse Disorder or CCD appeared about a decade ago, co-incident with the introduction of a new generation of pesticide called Neo-nicotinoids. CCD is characterized by a sudden and dramatic disintegration of the colony. The bees appear to leave the hive, loose their way and not return. This disorder is more problematic in colder months.

Research now shows that these new pesticides contribute to CCD. [1]. This study, funded by Harvard University Center for the Environment, showed that Neo-nicotinoids weakened the hive making it more susceptible to disease and parasites.

AGNIHOTRA, A GIFT of GRACE

Agnihotra is the ancient Vedic fire ceremony shown in many scientific studies to benefit the environment in myriad ways. This simple yet precise practice is actually a technology that holds the potential to reverse many of our serious ecological challenges.

Agnihotra is a small fire with specific natural materials and requires precise timing related to sunrise and sunset. Like Ayurvedic medicine which comes from the same body of knowledge, Agnihotra is both organic in nature and sophisticated. Furthermore, it is so simple that anyone can perform it. Please see more about Agnihotra at www.arksoffire.com

On an anecdotal level, my husband and I have been tending multiple honeybee hives for over a decade. The winters here in the upper Midwest of the U.S. are long and frequently the temperatures dip well below zero [F]. Like most bee-keepers in our area, we often experience over 50% loss over winter. It is not at all uncommon to lose all one’s hives, having to purchase and install all new “bee packages” come spring.

However, since we began to practice Agnihotra three years ago, we have had far less winter-kill. We have now had around 80% survival for the past two winters. Keep in mind, Agnihotra’s range of influence can be up to 200 acres. I have also begun putting Agnihotra ash in the winter bee food and sprinkling it around the hive entrances.

I have heard similar claims of healthy bee populations from other Agnihotra farms [aka Homa farming].

At Tapovan Farm http://www.tapovan.org , where Agnihotra has been practiced for thirty years, there are over one hundred thriving bee colonies.

Although I know of no controlled studies of Agnihotra and the honeybees, clearly Agnihotra has been proven to significantly reduce levels of pathogenic [disease-causing] bacteria. Please see this recent paper detailing several of these studies, https://newearth.media/agnihotra-harmful-bacteria/. This reduction in harmful bacteria would, obviously, benefit all lining creatures, including the honeybee.

Other scientific studies confirm that Agnihotra reduces harmful chemicals in the air surrounding the fire.

In a study from 2014 Agnihotra was performed in one location and the concentration of a number of air pollutants was measured before and after the fire. In another location, a control was performed by making a fire with identical materials and vessel but at the incorrect time [Agnihotra requires precise timing related to sunrise/ sunset.] This control ensures that it is Agnihotra that is affecting the outcome, not just the presence of a fire.

The results of the study were clear: Agnihotra reduced all the pollutants significantly as compared to the control. [2]. Sulphur dioxide, nitrogen oxides and harmful particulates were all clearly decreased.

This is another piece of evidence that Agnihotra might reduce concentrations of chemicals, such as pesticides, that are harming the bees. In order to prove this beyond a doubt, a similar study would have to be performed using pesticides such as neo-nicitinoids.

In addition to personal anecdotal experience and controlled scientific study, a third category of evidence comes from compelling reports and testimonials from the Bhopal tragedy.

In 1984, the worst and most lethal chemical explosion in human history occurred in Bhopal, India, killing and injuring tens of thousands of people. There were accounts of ten or so families living within one mile of the plant that were completely unharmed, even though many people were killed at a much greater distance. It was found that these families practiced Agnihotra regularly. [3]

A powerful Bhopal testimonial comes from Dr. Aditya Arya as given to Robert Bagnall with memories of that tragic time. He was five years old at the time of the gas leak and his parents performed Agnihotra regularly, “so we found that by doing this not only we but the surrounding peoples also saved when the leak of the gas happened and saved many lives near to us, but unfortunately many of the lives was passed. And I think if all or few might have done this Agnihotra by that time no loss of living being would be there… “ Read the full account in Robert’s wonderful book, The Ancient Solution to Modern Pollution.

If Agnihotra can provide protection from cyanide gas, could it do the same for the chemicals harming the honeybees?

As we seek answers for our increasing biological and chemical threats, Interest in this empowering technological gift from our ancestors has recently exploded. Clearly, something profound is taking place around the Agnihotra fire. How do we explain the astounding results?

WHEAT FROM the CHAFF?

Although we can’t state with finality how Agnihotra works, a model has emerged that appears to be consistent with the facts. Agnihotra may create an electrical field that concentrates and distributes bio-energy through the negentropic, self-organizing effects of non-destructive charge collapse. The result is a sorting effect similar to winnowing wheat from chaff over a screen. Instead of a metal screen, think of a powerful electrical field that requires a key energetic or electrical signature to exist within that field.

The result is a fractal, bio-active field that allows only life-enhancing substances.

Dan Winter offers a more thorough explanation in his book, [4], and numerous lectures available on Youtube .

Albert Einstein once said, “When the bees die, mankind has four years.” Pretty stark and dire warning that we must heed now to avoid the grim outcome. Fortunately, it appears that Agnihotra may contain the flame that leads us out of the darkness. This is so empowering because any individual can choose to provide the protection to her home, farm, family or neighborhood without depending on “authorities” to help or provide permission.

Please consider joining the growing worldwide family of Agnihotra practitioners, for the love of the hive.