You Can Now Automatically Generate Cryptocurrency by Wearing This Suit 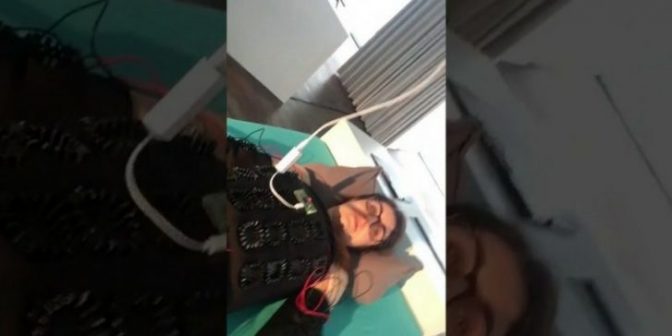 (ANTIMEDIA) — Cryptocurrency — particularly the parabolic rise in the value of Bitcoin, Ethereum, and a handful of other coins — is one of the big stories of 2017. Likewise, anxiety over the rise of automation is a recurring headline in the news, with many news networks, Anti-Media included, reporting that a great many people stand to lose their jobs to machines and algorithms in the next decade. Perhaps, then, it is no surprise that a company has launched a bodysuit that captures body heat and uses it to mine cryptocurrency, allowing humans a uniquely biological way to generate currency.

The hardware, manufactured by the Institute of Human Obsolescence, uses thermoelectric generators to harvest body heat, convert it to electricity, and then mine newer cryptocurrencies like Litecoin, Dash, Ethereum, and others. According to a report, 37 workers using the bodysuit clocked 212 hours, generating 127,210 milliwatts of electricity and mining 16,954 coins. The workers received 80 percent of the money.

The Hague-based IoHo was founded in 2015 with the aim of using art projects to help people monetize biological data production. In an age when personal data is increasingly a commodity, mined relentlessly by advertising and Internet companies, it made sense to turn the tables and allow humans, or “data workers,” to do some mining of their own using their own biological data production.

The founder of IoHo, Manuel Beltrán, explained the connection between art, data, and monetization.

“I think art is able to explain abstract things and through art, you are also able to trigger something. With this project I want to generate questions or sparks,” he said. “Now we give our data voluntarily and free to companies such as Facebook and Google, why not benefit from it?”

In addition to bridging the worlds of human data production and cryptocurrency, IoHo’s research projects are also taking on the issue of robots and algorithms fleecing the human workforce. This involves a distribution system called “Data Basic Income,” which provides an egalitarian basic paycheck in exchange for data. This can include labor, artistic choreography, or even just finger movements.

Beltrán says projects like the bodysuit crypto-mining and Data Basic Income are about allowing people to artistically explore the use of their bodies and movements as a way to earn a living. It’s about having hope.

“I met a lot of people who have pessimistic feelings about the future. Politics are out of control and we have no say. We are ruled by algorithms which we don’t even understand,” he explains, catching a revolutionary pitch. “We don’t know whom to fight and how we feel. Maybe art can help us to imagine and to start the fight.”