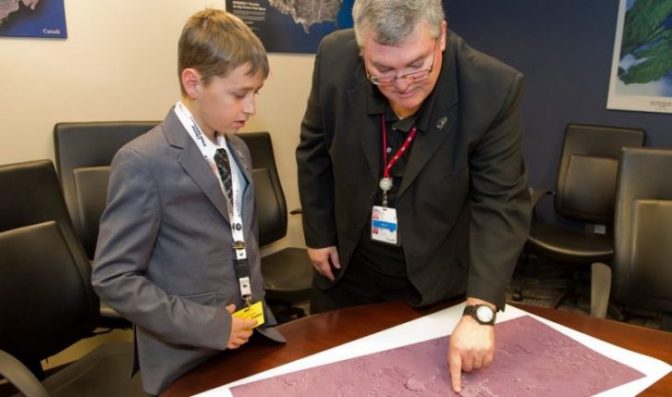 William Gadoury, a 15-year-old student from Lanaudière, Quebec, has discovered an ancient Mayan city by studying the stars!

Gadoury has been fascinated by all things Mayan for several years, devouring any information he could find on the topic. During his research, he studied 22 Mayan constellations and found that by projecting the constellations onto a map, the shapes corresponded perfectly with the locations of 117 Mayan cities. From there, he took his process one step further, by examining a twenty-third constellation which contained three stars, and only two corresponded to known cities. This anomaly caused Gadoury to hypothesize that there must be a city in the place where the third star fell on the map.

Incredibly, satellite images later confirmed that, indeed, geometric shapes visible from above imply that an ancient city with a large pyramid and thirty buildings stands exactly where Gadoury said they would be. If the find is confirmed, it would be the fourth largest Mayan city in existence.

According to Yahoo News:

“I didn’t understand why the Maya built their cities far away from rivers, in remote areas, or in the mountains,” Gadoury told the Journal de Montreal, explaining how he developed his theory.

Once Gadoury had established where he thought the city should be, the young man reached out to the Canadian Space Agency where staff was able to obtain satellites through NASA and JAXA, the Japanese space agency.

Scientists across the board have been blown away by Gadoury’s discovery.

“What makes William’s project fascinating is the depth of his research,” said Canadian Space Agency liaison officer Daniel de Lisle. “Linking the positions of stars to the location of a lost city along with the use of satellite images on a tiny territory to identify the remains buried under dense vegetation is quite exceptional.”

Being 15, Gadoury has decided to name the city K’ÀAK ‘CHI, a Mayan phrase which in English means “fire mouth.”

The next step for Gadoury will be seeing the city in person. He’s already presented his findings to two Mexican archaeologists, and has been promised that he’ll join expeditions to the area.

Says Gadoury: “It would be the culmination of three years of work and the dream of lifetime.”