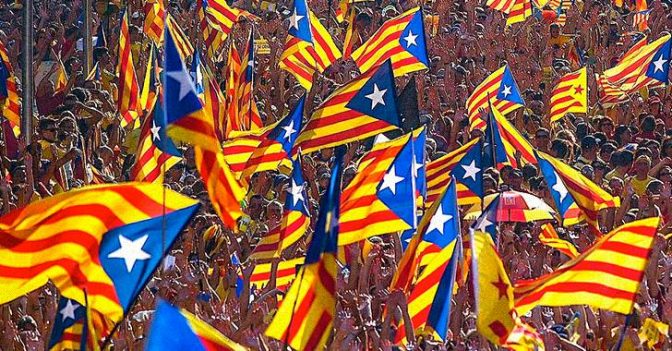 (ANTIMEDIA) Catalonia — On Friday, the Catalan parliament voted overwhelmingly to officially declare independence from Spain, a move reflecting the recent referendum in Catalonia that saw a reported 90% of Catalans vote in favor of breaking away.

The referendum, which the Spanish government declared illegal and violently attempted to suppress, was the result of a growing movement for independence in Catalonia, which Spain conquered and absorbed nearly 300 years ago.

Catalonia had its own language, culture, and institutions and only submitted to Spanish rule after a violent defeat in 1714.

The Spanish government has flatly rejected the Catalan regional government’s moves toward secession, declaring their actions unconstitutional and claiming that because of the ‘unconstitutional’ and ‘illegal’ nature of their moves for independence, the population’s vote is void.

Neither the Catalan or Spanish governments are backing down.

In response to Catalonia’s declaration of independence, the Spanish parliament voted overwhelmingly in favor of imposing direct rule over the region while other branches of government also began taking punitive measures against the Catalan government.

The constitutional court has begun proceedings against Catalan’s declaration of independence while Spanish prosecutors are set to file rebellion charges against Carles Puigdemont, Catalonia’s president.

Spanish Prime Minister Mariano Rajoy waxed nationalistic in his defense of strong-arming Catalonia. “Spain is a serious country, it is a great nation and we are not prepared in any way to allow some people to liquidate our constitution.”

Nevertheless, it is curious that he believes defending the constitutions means subverting a democratic process. In Catalonia, supporters of independence celebrated their regional government’s official execution of the popular vote.

Many Catalans feel they carry more weight than they should for the Spanish government as the region accounts for substantial portions of the country’s wealth and trade, GDP, and exports. Though the population of Catalonia is 16% of Spain at large, the region accounts for 25.6% of Spain’s exports, 19% of GDP, and 20.7% of foreign investment, according to data from Ministry of Economy, Industry and Competitiveness, Eurostat, Bank of Spain, as reported by the BBC.

In light of the economic factors, it’s arguable that the Spanish government’s interest in keeping Catalonia under its control are based on more than a commitment to their constitution.

Nevertheless, some polls in Catalonia have shown a divided populace. One poll before the referendum actually indicated Catalans preferred to stay with Spain by a margin of 8 percent. The actual vote, however, sided heavily with independence amid brutal police actions that attempted to block Catalans from entering voting booths.

This raises a complex issue for advocates of secession and decentralization, as well as opponents of imperialism. Catalan’s ‘membership’ in greater Spain is a result of the imperial Spanish government’s crackdown on a previously autonomous region. However, only 43% of the Catalan population voted in favor of secession, and while 90% of voters sided with independence, 47% had no say at all.

Though the popular refrain, “If you don’t vote you can’t complain” may come to mind, the conundrum still raises questions about the efficacy of representative democracy when it comes to respecting individual rights.

Regardless, the U.S. government came out in favor of the Spanish government Friday, expressing its support for its NATO ally. “Catalonia is integral part of #Spain,” statement from State Department spokeswoman Heather Nauert said. The statement also said the U.S. supports “constitutional measures to keep Spain strong and united.”

Regardless, the Spanish government’s moves on Friday include taking over Catalonia’s regional police and pushing for another vote in December.

Reuters reports that pro-independence factions in Catalonia intend to pushback with civil disobedience.

“The main secessionist group, the Catalan National Assembly, called on civil servants not to follow orders from the Spanish government and urged them to follow ‘peaceful resistance,” the outlet noted, citing Antonio Barroso of Teneo Intelligence, a global consulting firm.

“Tensions are likely to rise significantly over the coming days,” Barroso said. “Demonstrators might try to prevent the police from removing Catalan ministers from their offices if the central government decides to do so. This increases the risk of violent clashes with the police.”