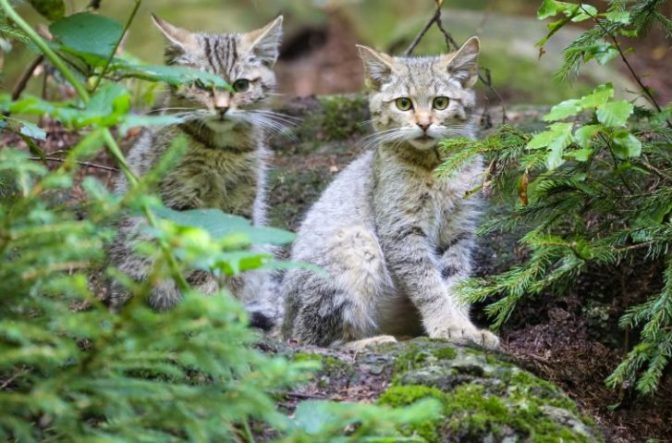 Animal domestication is an interesting thing. Domesticating wild animals, for instance, is overwhelmingly considered unjust captivity, but we view companion animals in our home far differently.

Bred with particular traits in order to make them more cooperative to captivity, many environmental ethicists would call domestication morally problematic because it creates unnatural companions that are stunted and inferior versions of their wild ancestors.

A new study, however, may put cat lovers at ease.

The analysis found that cats lived for thousands of years alongside humans before they were domesticated. And during that time, their genes didn’t change from wildcats, except for the distinctive stripes and dots of the tabby cat.

According to the research, the ancestors of today’s domesticated felines came from southwest Asia, and spread to Europe by 4400 B.C. The data suggests that the cats began congregating around farming communities in the Fertile Crescent about 8,000 years ago. It was here that they settled into the laps of humans on their own accord. While the cats fed off of the mice and rats around the humans’ crops and other agricultural byproducts, humans welcomed the rodent control. And so a mutually beneficial relationship ensued.

“This is probably how the first encounter between humans and cats occurred,” explained study coauthor Claudio Ottoni of the University of Leuven. “It’s not that humans took some cats and put them inside cages.”

Another look at African cats in Egypt, which spread into the Mediterranean and most of the Old World beginning around 1500 B.C., showed that humans were likely attracted to cats because of traits like sociability and tameness.

The analysis reveals the possibility that prehistoric human populations likely carried their cats along ancient land and sea trade routes to keep rodents at bay.

Ultimately, the data shows that cats became domesticated companions of humans without changing much, if at all, from their wild state, which reveals that while cats certainly took their time, which should come as no surprise, they certainly chose to be domesticated.

Dogs, on the other hand, which were the first animals to be domesticated, were selected to perform specific tasks, which ultimately led to particular traits being bred. Now, a diverse range of dog breeds exists today.

“I think that there was no need to subject cats to such a selection process since it was not necessary to change them,” said coauthor Eva-Maria Geigl. “They were perfect as they were.”

“We’re discovering incredible things about where they’ve come from, how far they’ve gone, and what kind of impact they’ve had on humans,” said Ottoni. “I think studying more about this species is going to open up even more about the domestication process.”