China Is Now The World’s Largest Producer Of Solar Power 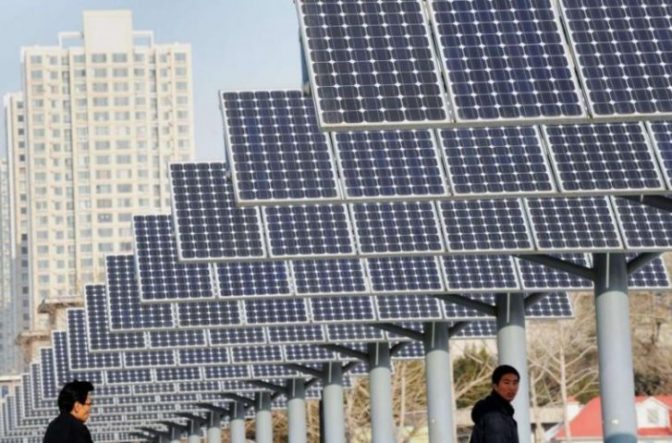 Unlike fossil fuels, which use finite resources that could eventually become too expensive to retrieve, solar power, along with other renewable energy sources, is generally unlimited in availability. Solar power generation has become a popular alternative to conventional energy sources in recent years, even in less developed nations, who are trying to reduce dependence on expensive imported fuels.

Of the countries of the world taking advantage of solar, it is China, the most populous in the world, who reigns supreme. The National Energy Administration (NEA) made the revelation after the nation doubled its installed photovoltaic (PV) capacity in 2016. By the end of the year, China had hit a capacity of  77.42 gigawatts.

Worth celebrating? If just considering raw numbers, it certainly is. But China’s massive population makes it much less impressive. In fact, solar energy only represents one percent of the country’s energy output.

However, the country has announced plans to focus even more attention on clean energy, seeking to add more than 110 gigawatts within the next three years. Such a goal could help the nation increase the proportion of its renewable energy use to 20% by 2030. To date, that number stands at a mere 11%.

To help the nation reach its goal, China plans to put more than $360 billion into renewable energy projects, including solar, wind, nuclear, and hydropower. The country currently relies heavily on coal, the burning of which creates smog, soot, acid rain, and toxic air emissions, while also generating waste like ash, sludge, toxic chemicals, and waste heat.

Mining, transporting, and storing coal also pollutes the land, water, and air. But China’s new plan could help the nation to finally obtain cleaner skies. The plan will also boost the economy, creating over 13 million jobs.

China’s expansive land makes the idea of large solar energy farms even more plausible. In fact, Shandong, Xinjiang, and Henan showed the greatest solar capacity increase of China’s provinces last year. And Xinjiang, Gansu, Qinghai, and Inner Mongolia lead the pack of the most overall capacity at the end of 2016.

The fact that China is willing to pour out such a hefty amount of money shows the commitment it is ready to make. And such a dedication to environmentally friendly sources ought to put pressure on other nations to work harder to achieve necessary goals for a cleaner and healthier planet.

Ireland recently joined the pack of noteworthy nation’s in this regard, passing a bill that would make it the first country to rid itself of fossil fuels. And Iceland is among some of the countries seeking out creative ways to divest from fossil fuels, drilling the world’s largest well for geothermal energy.

Though it’s unfair to assume every country will be able to complete with China’s increases, it should give countries like the U.S., who are falling behind on improvements, some much-needed motivation to implement policies that move away from fossil fuels and take advantage of clean energy, as opposed to protect the fossil fuel industry, which is of current concern.