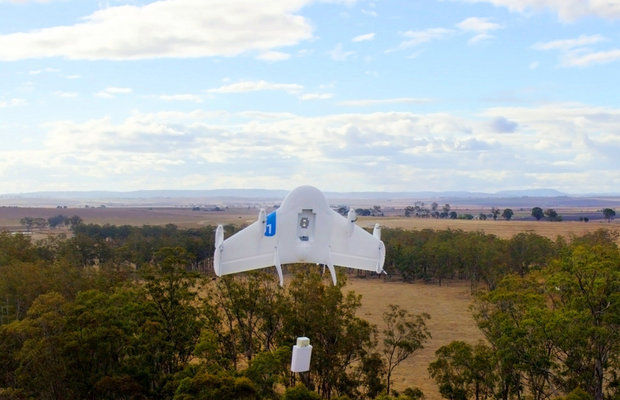 (Era of Wisdom) Google’s Project Wing is making an attempt to get into the game of delivery drones, presumably before Amazon starts on their similar project.

According to the Guardian, “Google and Amazon are in a race to push drone delivery out of the science fiction books and into reality, but they are by no means the only players in the race.

Australian drone manufacturer Flirtey partnered with Nasa in a US Federal Aviation Authority public trial of the delivery of medicine via drone in July, marking the first display of successful delivery by drone in the US.”

So we have the big players, big monopolies and corporations partnering with the US government, going down in history as a first commercial delivery by drone.

I write this brief article from a philosophical perspective; what will the end result of continued support for monopolies in general do? How do you feel about the fact that the future of technological advancement is largely in the hands of enormous corporations such as Google or Apple, and their state partnerships?

It would be wise to recognize the incredible power and trust that is placed in the hands of a corporation, when such a large group of people (nearly all of western society) opts to exclusively use Google as their search engine, or exclusively use Facebook as their social media site of choice.

It may be rough at first to use a different search engine, social media site, or whatever it is, but I believe that it benefits the people to use alternatives to monopolies; monopolies eliminate or severely downgrade an entire economic niche from being available to the public.

In other words, when a monopoly such as Google is the number one search engine, this eliminates the people’s ability to make a business out of a search engine. It lowers people’s chances of being successful if they were to start their own business, a search engine.

The thing is, we people need our business. Perhaps we have to support each other financially, for the goods and services we need, if we really want to prosper as a people. That’s Agorism.

The incredible prevalence of monopolies in America goes a long way to explain the gaping hole in the American people’s motivation to succeed.