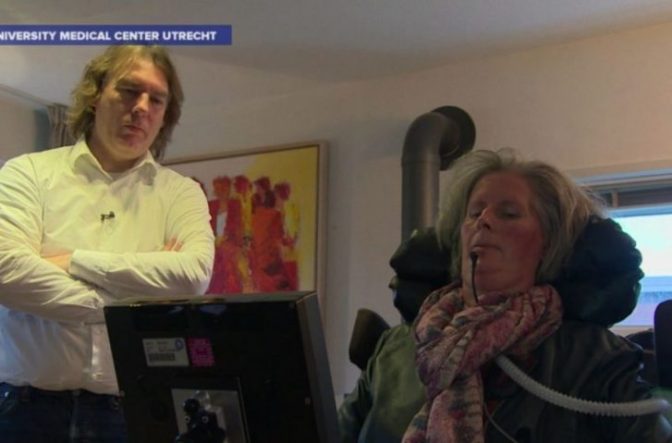 A paralyzed woman in the Netherlands is making history as the first person to be fitted with a new kind of brain implant that permits patients incapable of speaking or moving to finally communicate through their thoughts.

“It’s special to be the first,” notes the patient referred to as HB, who is 58 years old and wishes to remain anonymous. The woman was diagnosed with amyotrophic lateral sclerosis (ALS) in 2008, a severe disease that damages nerve cells, which results in people losing control of their bodies.

HB lost the ability to breathe within just two years of being diagnosed, resulting in her requiring a ventilator. “She is almost completely locked in,” explains Nick Ramsey at the Brain Center of University Medical Center Utrecht in the Netherlands.

At the time of meeting the woman, Ramsey noted the woman used an eye-tracking device to communicate. This device gave HB the opportunity to choose letters on a screen to spell out words. But one in three people with ALS experience loss of eye movement, making HB’s current communication a potential dead end.

Teams have been working hard to generate a solution for this by trying to come up with devices that are controlled directly by the brain.

The new implant HB has works by reading brain activity and translating it into a signal that is capable of controlling a computer or a robotic limb. The device allows her to spell out words and sentences, works anywhere, and gives her the opportunity to communicate with people in the outside world as opposed to relying on medical experts.

“This is a world first,” Ramsey said. “It’s a fully implantable system that works at home without need for any experts to make it work.”

The devices initially proved difficult to fit into people’s daily lives, however, as they typically require recalibration from a team of engineers daily.

“We thought, let’s make it simple and affordable for a patient who really needs it,” noted Ramsey.

The device is surgically implanted into the patient’s brain. Two electrodes are positioned over the motor cortex region of the brain, which is responsible for movement. One electrode is placed over the part of the brain that moves the right hand, and the other is placed over the part of the brain that takes over when you want to count backwards.
HB’s electrodes are hooked up to a pacemaker-sized transmitter implanted into her chest. The transmitter is then capable of wirelessly communicating with a computer program on a screen in front of her. HB watches the screen, and as a square moves over letters, she imagines moving her right hand to click on a letter to spell out words and, ultimately, the thoughts she wants to convey. The process to communicate may be slow, with it requiring a few minutes for HB to spell a single word, but she’s getting faster with training.

“Now I can communicate outdoors when my eye-track computer doesn’t work,” HB said. “I’m more confident and independent now outside.”

Ramsey hopes to speed up the process for HB by incorporating more electrodes. He has a goal of utilizing systems of 30 or 60 electrodes to decode sign language or internal speech much more rapidly than the current system.

“Then you could spell the way a deaf person would spell,” he explained.