Confucius Tells You How to Change the World for the Better 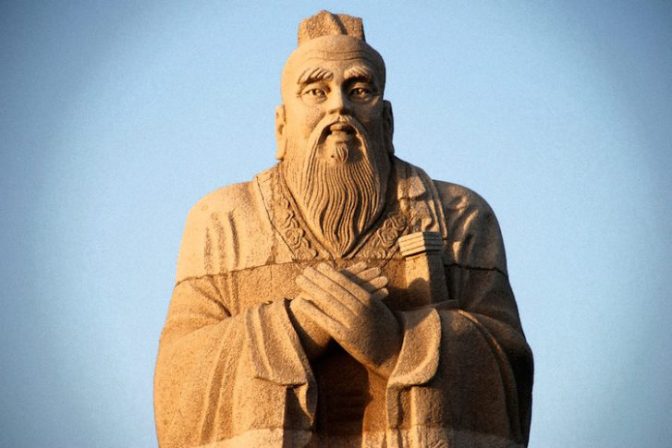 One of the great dilemmas of at our times is the question of how best to apply ourselves in the quest to change the world for the better. Where is our limited time and finite personal energy best spent if we wish to manifest a world free of corruption and ignorance?

Are we supposed to vote? To participate in the system in some civic way? Should we hit the streets protesting, or gang up and attack ideas we don’t like and disagree with? Can we change the world by arguing with others, or by constantly parroting a preferred version a reality to everyone we meet? By going to war at the behest of psychopaths?

Of course our attention is deliberately directed on to these arenas, but the answer to this question is deeply personal, as unique to each individual as is the eye’s iris. At its core, though, the quest to change the world begins with the crucial work of changing one’s self.

This fundamental truth of human experience is perhaps best explained in one of my favorite quotes by the ancient Chinese philosopher Confucius. Writing in the classic treatise, The Great Learning, some five-hundred years before Christ, Confucius explains…

“The illustrious ancients, when they wished to make clear and to propagate the highest virtues in the world, put their states in proper order. Before putting their states in proper order, they regulated their families. Before regulating their families, they cultivated their own selves. Before cultivating their own selves, they perfected their souls. Before perfecting their souls, they tried to be sincere in their thoughts. Before trying to be sincere in their thoughts, they extended to the utmost their knowledge.

This really is the starting point… as succinct as one could put it. To change the world you must first embark on a quest for truth within yourself. Commenting on this simple idea, contemporary philosopher Will Durant points out:

Here is sound moral and political philosophy within the compass of a paragraph. It was a highly conservative system; it exalted manners and etiquette, and scorned democracy; despite its clear enunciation of the Golden Rule it was nearer to Stoicism than to Christianity.

What was his basic philosophy? It was to restore morality and social order by spreading education.” ~Will Durant

Education of the self about the self is the foundation of sincerity of thought, which frees us to see things for what they really are. From here, anything is possible.

Dylan Charles is a student and teacher of Shaolin Kung Fu, Tai Chi and Qi Gong, a practitioner of Yoga and Taoist esoteric arts, and an activist and idealist passionately engaged in the struggle for a more sustainable and just world for future generations. He is the editor of WakingTimes.com, the proprietor of OffgridOutpost.com, a grateful father and a man who seeks to enlighten others with the power of inspiring information and action. His remarkable journey of self-transformation is a testament to the power of the will and the persistence of the human spirit. He may be contacted at [email protected].

This article (Confucius Tells You How to Change the World for the Better) was originally created and published by Waking Times and is published here under a Creative Commons license with attribution to Dylan Charles and WakingTimes.com. It may be re-posted freely with proper attribution, author bio, and this copyright statement.