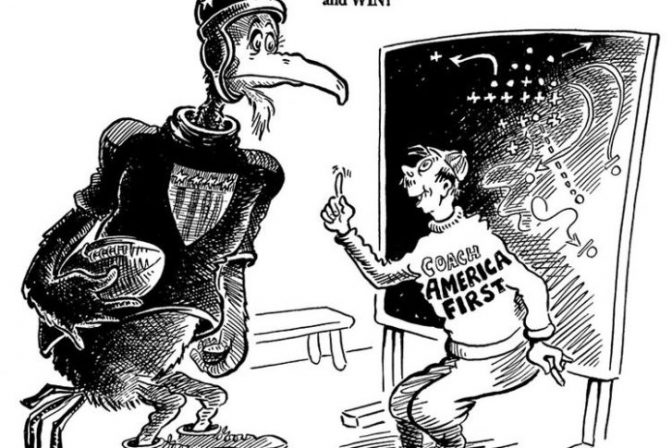 Many people associate Dr. Seuss with children’s books, but he also wrote over 400 political cartoons during World War II.

It was in the years leading up to this war that Seuss poured his talent into creating cartoons for the liberal publication PM, in which he focused heavily on pushing back against the “America First” movement that opposed America’s involvement in the war.

Many of these political cartoons echo a political upheaval happening today. Donald Trump adopting the campaign slogan “Make America Great Again” feels eerily familiar, but upon a deeper glance at many of Dr. Seuss’s cartoons, it becomes clear just how much the old is suddenly new again — more than 70 years later.

One of the cartoons, a drawing mocking the non-Interventionist America First movement, has begun circulating the Internet recently amid protests against President Trump’s executive order to ban immigrants and refugees from seven Muslim-majority countries from entering the U.S.

The cartoon, which exposes the blunt disregard for the livelihood of all children, not just American children, as well as the naïveté regarding the dangers of Nazi Germany, is all too familiar to modern protests against isolationism.

And along with such cartoons revealing a disturbing parallel to the modern refugee crisis, there are others that targeted issues like anti-Semitism, racial inequality, and political obstructionism.

As a collection, Geisel’s war cartoons target isolationism, anti-Semitism, and racism. They skewer Hitler, Mussolini, and a variety of American nationalists, including Charles Lindbergh and the Catholic priest and radio host Father Charles Coughlin, a fervent anti-Semite and conspiracy theorist. But they also deploy a fierce anti-authoritarianism and humanism that runs through all of Dr. Seuss’s books.

Seuss’s vocal objection to the anti-interventionist approach is, according to The Atlantic, likely the result of his German-American upbringing in Springfield, Massachusetts, and his circle of friends in New York.

In 1976, Seuss responded to an interview request from Dartmouth College, saying, “I believed the USA would go down the drain if we listened to the America-First-isms of Charles Lindbergh and Senators Wheeler and Nye, and the rotten rot that the Fascist priest Father Coughlin was spewing out on radio. I, probably, was intemperate in my attacks on them. But they almost disarmed this country at the time it was obviously about to be destroyed.”

Seuss may be lesser known for his political cartoons, but they are finding an audience now, as protests continue in opposition to President Trump. Signs, memes, and viral tweets inspired by his words are all emerging in defiance of an old injustice made new again.

It’s intriguing the various ways people create awareness. There are protests, there are shared stories, and then there are even funny cartoons, which superficially draw you in for a laugh, and yet can reveal something much deeper, which is the case with Seuss’s political cartoons.

“Humor has a tremendous place in this sordid world,” Seuss once said. “It’s more than just a matter of laughing. If you can see things out of whack, then you can see how they can be in whack.”