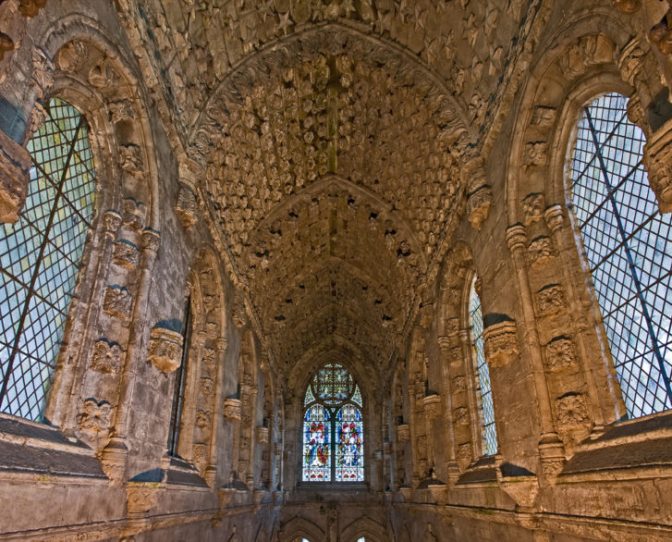 German philosopher Johann Wolfgang Goethe had a name that symbolically linked J.S. Bach and Mozart. He was born before Bach’s death, before Mozart’s life, and also outlived both of them.

Goethe famously said that music is liquid architecture and architecture is frozen music. He lived during the same era that German scientist Ernst Chladni popularized his images of cymatics, or visible sound waves.

Small particulate matter rests on a square metal plate and a violin bow is drawn along one of its edges to produce geometric formations. You have probably seen Chladni plates before:

Sound waves produce literal “waves” in water. When a sound source is channeled through the center of a surface (a drum head or stereo speaker), the vibrations will tend to ripple out symmetrically and form into coherent geometric shapes.

In a case of art imitating art, a press release earlier this year (2006) announced that “frozen music” had been found hidden in the architecture of the 15th century Rosslyn Chapel – the same chapel popularized at the end of Dan Brown’s book The Da Vinci Code. The chapel’s puzzling architecture remained unexplained for well over 450 years…

The announcement explained that a total of 215 “musical cubes” in the pillars and arches of Rosslyn Chapel were found to match 13 unique geometrical sound patterns, known as Chladni figures or Cymatics … The Mitchells found that each of the cube patterns matched specific musical tones that were organized into vertical groups around the chapel’s pillars. Using these tones to form a melody, the men then composed and staged the premier performance of “the Rosslyn Motet” on May 18, 2007 inside the chapel.

The Rosslyn Chapel is filled with these cubes that depict the Chladni figures, centuries before Ernst Chladni discovered them with his vibrating metal plates. The video above shows individuals singing and causing particles on a drum head to arrange in patterns, highlighting the connection between human voice, sacred music, and cymatic geometry.

This Rosslyn Motet is a musical cipher. Each of the cubes were arranged to spell out a melody from which the composition was created. Musical cryptography is an ongoing theme in my work. I focus on it because I believe it represents an effort on the part of a composer to reach a higher order of compositional self-awareness, adapting to the melodic cipher’s pre-existing constraints and pre-designated associative meanings.

In the case of the Rosslyn Motet, the cipher’s meaning points toward the very mystery of cymatics themselves. Performed inside the Chapel, it represents the source of goethe’s coded phrase, architecture is frozen music and music is liquid architecture.

Harmony of the Spheres (Music of the Macrocosmos)

It bears mentioning as an afterward that the notion of “musical cubes” could be taken in contrast to the “harmony of the spheres”. The ancient Greeks believed each planet and zodiacal constellation transmitted a distinct vibration, which taken relative to the others would generate something equivalent to musical harmony.

The Kabbalistic Cube of Space contains the 10 celestial bodies and 12 zodiac signs within it. It represents not the squaring of a circle but rather the cubing of the spheres. Confirmation comes from Paul Foster Case’s B.O.T.A. teachings during the early 20th century. He attributed musical notes to the tarot cards, and placed one card at each coordinate of the cube (12 edges, 6 faces, 3 planes of axis, and one center.)

For more on the kabbalistic cube of space, musical tarot, and melodic cryptograms, check out Audiomancy (click here).