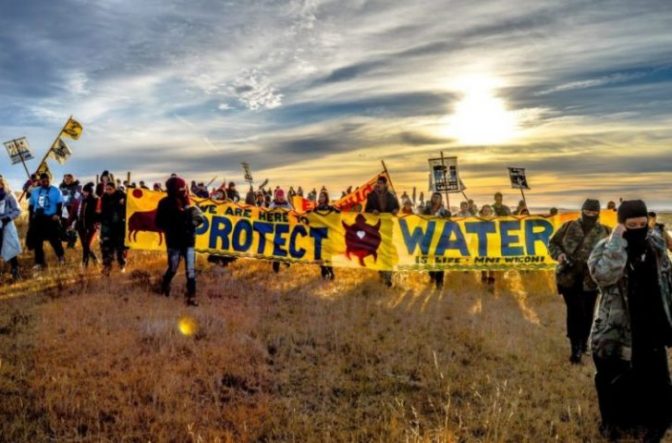 Of the many concerns cited by those who oppose the Dakota Access Pipeline (DAPL), the likelihood of a leak occurring has been most pressing. While tribe members worried a leak could contaminate a primary source of water for the Standing Rock Sioux Tribe, environmentalists pointed out how it could also harm wildlife, increase reliance on fossil fuels, and more.

But despite the protests, the legal activity, and cries from the media, the pipeline passed. While no one wants to say “I told you so” when it comes to Mother Earth and its many beings, it’s necessary to point out that those who oppose the pipeline have already seen a some of their worries fulfilled.

On April 6, before DAPL was even completed, it suffered its first leak, spilling 84 gallons of crude oil at a South Dakota pump station.The spill occurred during the final stages of preparing to transport oil. Naturally, the incident sparked fury from the Standing Rock Sioux Tribe as well as other activists who protested its development.

Though it’s been reported that the leak was quickly contained and cleaned, critics have been quick to point out that, while it’s great the spill wasn’t worse, it was, like many other spills, absolutely avoidable. The spill could have been prevented if state officials had simply listened to the tribe’s concerns.

“They keep telling everybody that it is state of the art, that leaks won’t happen, that nothing can go wrong. It’s always been false. They haven’t even turned the thing on and it’s shown to be false,” Jan Hasselman, a lawyer for the Standing Rock Sioux tribe said. “It doesn’t give us any pleasure to say, ‘I told you so.’ But we have said from the beginning that it’s not a matter of if, but when. Pipelines leak and they spill. It’s just what happens.”

President Trump’s financial ties to the oil company, Energy Transfer Partners, have made legal battles impossible to conquer. Now the tribe is focusing on the environmental argument, urging that the project requires a full environmental study to assess the risks.

“Our lawsuit challenging this dangerous project is ongoing, and it’s more important than ever for the court to step in and halt additional accidents before they happen – not just for the Standing Rock Sioux Tribe and our resources but for the 17 million people whose drinking water is at risk,” said Standing Rock Sioux Tribe chairman Dave Archambault II in a statement.

Even more alarming is why this leak is only just reaching our eyes and ears now. Energy Transfer Partners previously battled in court to keep information regarding the status of the project confidential, and it seems we now have a better understanding as to why.

“What kind of oversight and accountability is there if no one even finds out about these things until weeks later?” questioned Hasselman.

Neither the company nor the state have yet to make a public announcement about the spill. Brian Walsh, an environmental scientist with the South Dakota Department of Environment and Natural Resources, says this is the result of the spill being so minor — caused by a mechanical failure at a surge pump. “It’s not uncommon to have a small release at a pump station,” said Walsh.