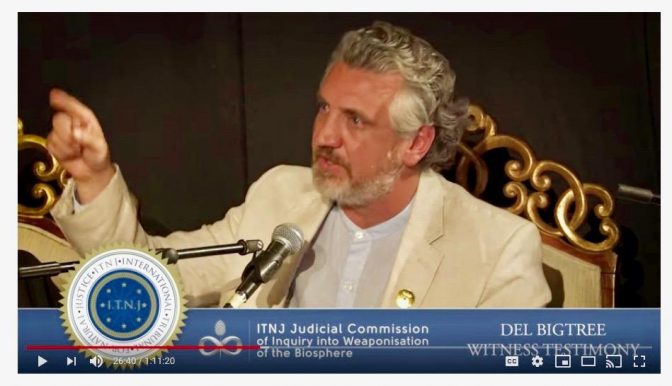 Written by the Committee to Support the ITNJ

The global vaccine lobby is the largest and most powerful of all lobbies, with a revolving door policy operating between the pharmaceutical companies and their regulating bodies. As the list of vaccines being added to the schedule grows with alarming frequency, and with forced vaccines looming large for adults as the REAL hidden agenda, we are greatly indebted to Del Bigtree for the risks he takes in refusing to remain silent at this most important time when our very survival is under threat.

As a medical journalist and Emmy-award winning producer for national TV programs such as The Doctors and Dr. Phil, Del Bigtree’s career took a dramatic turn when he learned of the coverup of a study revealing a causal link between the MMR vaccine and autism, as exposed by the USA Center for Disease Control (CDC) whistleblower, Dr. William Thompson.

Bigtree is one of the preeminent voices of the vaccine risk awareness movement. His non-profit organisation, ICAN DECIDE is leading worldwide investigations into drug and vaccine fraud and has already resulted in winning two lawsuits against US government agencies: Dept. of Health and Human Services; and the National Institutes of Health (NIH). During his in-depth testimony given to the Judicial Commission of Inquiry Into Weaponization of the Biosphere of the International Tribunal for Natural Justice (ITNJ) on June 23, 2019 in Indonesia, Del Bigtree (producer of the documentary, VAXXED and a popular web health talk-show, Highwire) reveals what he discovered through subsequent forensic investigation into vaccine safety, and his ongoing campaign for legitimate scientific testing. Despite the never-ending claims of scientific evidence from the vaccine industry, in reality nobody is presenting any science but merely repeating claims about the science.

Currently in the USA (a country with arguably the best doctors and medical facilities in the world) one in six children has a developmental disability, while a shocking 54 percent have a chronic illness. Diseases such as ADD, Autism, Anxiety, Asthma, Depression, and Diabetes are at epidemic levels, and for the first time in history the national IQ is in decline, yet the CDC refuses to fund studies into vaccines as a causal factor. Perhaps even more shocking is the rate of babies dying on their first day of life: 50 percent higher in the USA than in any other developed nation. Yet it remains unquestioned that America is also the only country where babies are vaccinated the very day they are born!