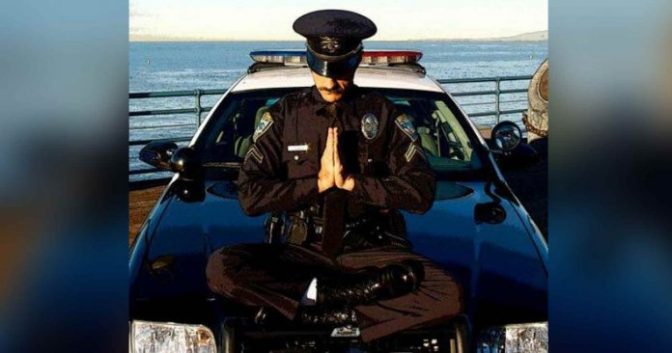 To train their officers on how to be less aggressive and more mindful, a police department has begun teaching cops yoga—and it is working.

Aside from the overwhelming physical benefits of yoga, like increased flexibility, muscle strength, and protection from injury, the mental benefits are many. Yoga has been shown in numerous studies to help in the reduction of stress, anxiety, and depression, while at the same time improving blood pressure. Although, the list of mental and physical benefits, while immense, is lacking any mention of reduction in police brutality. However, thanks to a forward-thinking department in San Leandro, California, that could soon change.

“I was just calling to find out what the heck was going on. I was calling as a concerned citizen,” she explained to ABC 7.

Instead of ignoring her call and writing her off as ‘anti-cop’, Chief Jeff Tudor actually called her back. During their conversation, Zygielbaum offered to help the department in the best way that she knew how. Being a certified yoga instructor, she offered to teach yoga to the officers and staff at the department—for free.

Zygielbaum’s classes are already starting to have their effect.

“Do you buy into the idea of mindfulness,” ABC 7 News Reporter Katie Utehs asked Officer Alex Hidas who had just taken the class.

“Absolutely,” Hidas responded. “I’ve experienced several times where I’m out there and I can feel my body, I can feel under stress, the adrenaline pumping, and your fine motor skills kind of go out the window and what brings you back is being able to control your breathing.”

The idea of curbing police brutality with yoga through seeking mindfulness may seem like a stretch to some. However, the benefits of simply being mindful are so compelling that UC Berkeley has launched a study to measure the results specifically on police officers.

“Anecdotally at least the effects seem to be positive,” said Professor Jack Glaser a social psychologist and Associate Dean of Public Policy at UC Berkeley who launched the study over the fall.

“It appears to have a lot of benefits that could be relevant to policing both in terms of the performance of their job and in terms of emotional welfare that they experience,” said Glaser.

According to ABC 7, this study will look at mindfulness as a deterrent to racial profiling. Simply put, participants will be shown pictures depicting police scenarios and potential suspects. One group will be lead through a mindfulness meditation before doing the exercise. The other group will just look at the pictures.

“All of the things that lead-up to that split second decision are where the opportunities lie for avoiding that happening at all and mindfulness, I think, has great potential for just that sort of thing,” Glaser said.

According to Glaser, the study will take two years to complete. However, Chief Tudor decided that he won’t wait that long to reap the benefits of his officers achieving mindfulness. The chief has begun building a wellness program inside the department with the aim of improving officer health—both mentally and physically. The program will include a gym, as well as nutrition and sleep course, and—most importantly—yoga to teach the officers how to be mindful.

“With that health becomes a more patient officer and that’s what our communities expect and deserve,” explained Chief Tudor. “If I can in any way impact them by providing them with some tools or some knowledge that can better their lives that’s the ultimate goal,” he said.

As the number of citizens killed by police continues in its epidemic levels, clearly American cops are in need of intervention. What better way to combat obstinate violent tendencies than with mindfulness and peace.

We agree with officer Hidas when he says, “I can’t imagine going forward that every department wouldn’t have something similar to this.” Hopefully so, officer. Hopefully so.