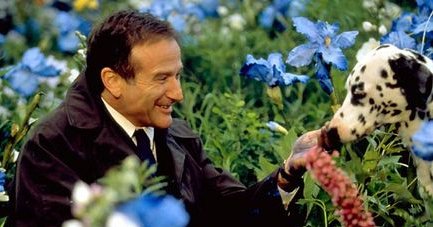 After hearing the sad news of Robin Williams and his suspected suicide. I am really tired of hearing some people refer to depression as a ‘disease’. It is not a disease, but more of a chemical and emotional imbalance of the brain, normally affected by long-term stress, deep trauma or grief, for some it is difficult to diagnose the root cause. Here is a good article written by Dr. John Grohol on defining Depression for those of you that are insistent on calling it a ”disease”.

Furthermore, should it really be referred to as a ‘mental illness’? Through my research and personal experiences, depression is an understandable psychological reaction to the stress and violent deformities of the modern world.

I have tried a number of conventional and non-conventional methods to treat my own depression and I feel the most valuable activities are spending time in nature or in the company of animals, rather than people, writing and creating and being as honest with one’s self and others as possible.

Obviously, getting to the root of possible triggers and to the root of issues such as recovering from anger, trauma, and grief are examples that are the root cause of the problem. Diseases like cancer or diabetes are not cured in this way.

People whom suffer from depression are usually highly aware and sensitive and also creatively gifted or perceptive in some way. As a result they are people that find it difficult to feel normal in a society that places value on things that are leading humanity and the environment to destruction. People that suffer from depression find it difficult to connect with others on a personal level and mostly they are simply overwhelmed and disheartened by the amount of injustice, destruction, greed, cruelty and abuse that goes on in an increasingly hostile world.

A number of other environmental scientists such as Dr. Stephan Harding, a deep ecologist like myself see the value in needing to restore our lost connection with Earth and understand that we are all part of One greater consciousness. Deep Ecologists will tell you that there is something wrong with you if you are not deeply saddened or depressed by the state of things at the moment. We are living in the sixth greatest mass extinction, we are killing off the last of the dolphins, whales, tigers, great apes, elephants, rhinos, insects, bees,  amphibians, destroying the oceans, ripping apart the last of the Rainforests and indigenous people, we are seeing the largest scale ecocides and genocides.  The amount of torture and abuse that our fellow creatures suffer out our hands is just overwhelming let alone the killing, torturing, abusing and trafficking of women and children en mass worldwide, innocent victims of insane wars, exploitation and slavery.

It is important to understand the psychological impact of the current ensuing chaos worldwide as we now also have the internet and technologies that bring such information into our awareness. Some of the emotions we feel with depression are a collective conscious reaction to this daily violence and exploitation along with grieving our severed connection with mother earth and our lost ancient knowledge of who we are and where we have come from. The illusion of separation has created a very ill world. Anyone that is not affected by this should go into therapy and be diagnosed as mentally ill, not those of us that are acutely aware of what is unfolding around us.

We have been made to feel nothing more than commodities who need to be obedient and our only value is as consumers and as obliging wage slaves, whose taxes go to destructive exploits. Our human rights are being fast eroded and many of us cannot even imagine a different world.  It is a challenge to imagine that we can rise above these lower vibrations. There are still ways we can become self-empowered sovereign beings. There are ways we can create a more harmonious and sustainable world without predatory imperialism and its destructive force that has driven this rise in depression and suicide worldwide, even among those regarded as the most privileged. This is an obvious testimony among those of us that are empathic and compassionate beings, that humanity needs to change. We must begin to learn our value as human beings, as part of a larger global community that is working towards change in the midst of all this chaos. We can begin to reclaim our connection with earth in various ways through growing food communally, rebuilding and re-inventing new communities and a transparency in our relationships, in government institutions, in society. Teaching and establishing new value systems in societies and communities, with emphasis on  the value and practice of unconditional love, kindness and acceptance, rather than status, idealized perfection and elitism, which are all forms of violence and repression on the human psyche.

I personally draw a lot of strength from the work of Jeff Foster and Matt Licata, Jeff Foster has an interesting explanation of depression being a sign of needing Deep Rest from it all. Being someone in need of deep rest myself after working for ten years in environmental conservation, I can vouch for this. However, current society would rather say there is something wrong with people like us, than admit that society itself is malfunctioning, not serving humanity but serving an elite few and there it is corrupt to the core. It is modern society that needs to be treated for mental illness, especially the psychopaths and pedophiles holding power in government, religious institutions and monarchy.

Accepting our humanity is key in healing, accepting it is okay to feel broken, deep sadness and the spectrum of emotions that bring us the gifts of questions and answers in the form of truth. It is time for humanity to question its actions upon earth and ourselves. It is time to be totally honest and say ‘fuck it’, I need to allow myself to fall apart into the dark hollow and just allow these emotions to flow through, to just be free to feel what comes through, it’s not normal to keep marching on while a war on consciousness is ensuing, the pressures from others, from society which is dictating more and more how people should conform and not make their own choices.

The subtle violence of what society calls normality is disturbing enough and so is what is expected of people to conform in such an environment. Enough to drive someone with depression, to suicide, because they see it as the only means of relief and peace out of an un-peaceful world that currently denies most people their humanity.

I have lost several good friends to suicide and I understand how it feels to be that despaired. However, I am fortunate enough to be constantly reminded of the love surrounding me and so I try to pull through best I can even at the worst times, so as to stay here for those that love me and it’s not easy to do at times. Being as honest with one’s self and others as much as possible is important, we are not robots, and we are not machines. Being in nature, being creative, painting, writing, singing, making things, developing projects that contribute to a better and more harmonious world, playing music, getting involved in a community project, doing something that aids deep relaxation, meditation or trance, banging a drum, all can help bring us more into the moment and reconnect us with the joy that comes from just being.  Reaching out as much as possible to friends and family, without feeling humiliated or the stigma that is carried with the label ‘depression’ and the negative phrases that goes with it, mental illness, and mental disease. Krishnamurti was right “It is no measure of health to be well adjusted to a profoundly sick society.”

Be The Change Hypnotherapy

Where does true happiness lie? It doesn’t ”lie” anywhere because it is True Happiness! -Carlita Shaw
“It’s pretty ironic that the so-called ‘least advanced’ people are the ones taking the lead in trying to protect all of us, while the richest and most powerful among us are the ones who are trying to drive the society to destruction.” – Noam Chomsky