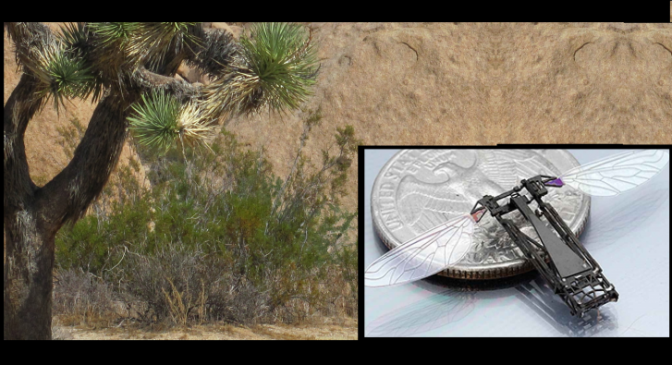 (Era of Wisdom) According to military tech scientists, desert plants (shrubbery) are the only thing that can stop a Cicada microdrone. Gravel won’t stop it, not other plants, not crashing into things: just thick, splintery, tangly desert plants.

The sources of this claim are quotes repeated in several online news articles, by Daniel J Edwards and Aaron Kahn, US Naval Aerospace Engineers. It’s real, but the information on how shrubs stop microdrones is very much lacking. It makes sense though, that only something so tangled and barbed and complex, a product of nature, could stop a Cicada microdrone.

Kahn told The Washington Post, “they’ve [Cicada Microdrones] flown through trees. They’ve hit asphalt runways. They have tumbled in gravel. They’ve had sand in them. They only thing that we found that killed them was desert shrubbery.”

The root of this discovery appears to be a paper by Edwards and Kahn entitled “Navigation, Guidance and Control For the CICADA Expendable Micro Air Vehicle.”
It can be found at this link, but you need to pay to read it unfortunately: or have some kind of academic access to it.

Nature holds a wealth of sometimes purposeless biodiversity: to the lover of nature, it’s amazing when a purpose is found for something that seems useless.

Perhaps in the future, people seeking sovereignty from the technocratic power of government will find refuge in communities surrounded by desert shrubbery, strategically placed to ward off microdrones.