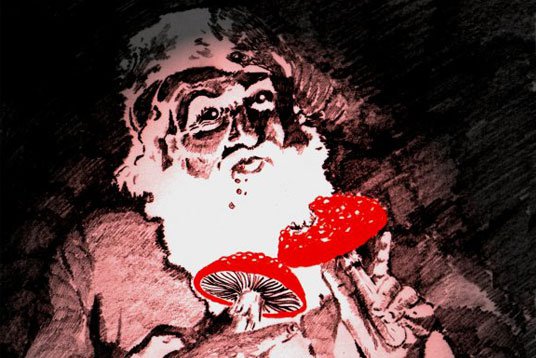 *Edit: CE by no means promotes eating wild amanita muscaria. Although very rare, there have been reported cases of amanita posioning so we suggest doing your research before trying to hunt it down.

As a child, the Christmas season always represented great things. The holiday cheer, the familial celebrations, and most exciting of all, presents. But as I grew into adulthood, the sparkling veil of the Christmas season soon revealed it’s true form – a religious-based, commercial lie meant to perpetuate consumerism and materialism.

I eventually let go of my jaded view of Christmas, and created my own meaning for the holiday season, which now saw the end of the year as a dedicated time to spend with the ones I love, and to reflect on the experiences and lessons of the previous year. Not that Christmas is the only time to do this, but let’s face it, life has a tendency to otherwise keep us preoccupied.

But recently my views on Christmas were challenged once again, after reading up on the pre-Christian history of Santa Claus and his ‘magical’ reindeer. I was shocked to hear a proposed theory of the story’s origins, which explained how Santa may have originally been a northern Eurasian shaman who used the psychedelic mushroom amanita muscaria, and that many of the well known Christmas symbols, such as the tree, the star, and the gifts, were actually inspired by esoteric practices involving the red and white magic mushroom.

A Siberian Shaman With A Bag Of Special ‘Gifts’

Could the story of Santa actually be inspired by Shamanistic practices out of Northern Europe and Asia during the pre-Christian era?

In his article, Magic Mushrooms May Explain Santa & His ‘Flying’ Reindeer, author Douglas Main explains how the story of Santa and his flying reindeer can be traced to an unlikely source: hallucinogenic or “magic” mushrooms. Speaking with John Rush, an anthropologist and instructor at Sierra College in Rocklin, California, Main learned more about Santa’s story.

“Santa is a modern counterpart of a shaman, who consumed mind-altering plants and fungi to commune with the spirit world,” said Rush.

According to the theory, the legend of Santa derives from shamans in the Siberian and Arctic regions who dropped into locals’ teepee-like homes with a bag full of hallucinatory mushrooms as presents in late December.

“As the story goes, up until a few hundred years ago these practicing shamans or priests connected to the older traditions would collect Amanita muscaria (the Holy Mushroom), dry them, and then give them as gifts on the winter solstice,” Rush told LiveScience. “Because snow is usually blocking doors, there was an opening in the roof through which people entered and exited, thus the chimney story.”

Amanita muscaria grows freely around conifers and birch trees. Could the tradition of placing presents under the tree be symbolic of psychedelic fungi’s symbiotic relationship to forest trees?

In his book, Mushrooms and Mankind, late author James Arthur points out that amanita muscaria, also known as fly agaric, lives throughout the Northern Hemisphere under conifers and birch trees, with which the fungi —which is deep red with white flecks — has a symbiotic relationship. This partially explains the practice of the Christmas tree, and the placement of bright red-and-white presents underneath, which look like Amanita mushrooms, he wrote.

Was the Christmas tree tradition based off of ancient Northern European symbology? Painted by Oluf Olufsen Bagge.

“Why do people bring pine trees into their houses at the Winter Solstice, placing brightly colored (red and white) packages under their boughs, as gifts to show their love for each other … ?” he wrote. “It is because, underneath the pine bough is the exact location where one would find this ‘Most Sacred’ substance, the Amanita muscaria, in the wild.”

Author Dana Larsen elaborated on the pre-Christian symbology of the Christmas tree in her article, The Psychedelic Secrets of Santa. She explains how the ancient northern European people, including the Lapps of modern-day Finland, and the Koyak tribes of the central Russian steppes, believed in the idea of a World Tree. The World Tree was seen as a kind of cosmic axis, onto which the planes of the universe are fixed. The roots of the World Tree stretch down into the underworld, its trunk is the “middle earth” of everyday existence, and its branches reach upwards into the heavenly realm.

“The North Star was also considered sacred, since all other stars in the sky revolved around its fixed point. They associated this “Pole Star” with the World Tree and the central axis of the universe. The top of the World Tree touched the North Star, and the spirit of the shaman would climb the metaphorical tree, thereby passing into the realm of the gods” wrote Larsen.

“So Up To The House-Top The Coursers They Flew”: Breaking Down The ‘Flying’ Reindeer

Perhaps one of the most memorable aspects of Santa Claus mythology are his co-pilot counterparts, his flying reindeer.

Reindeer are rampant in Siberia, and are also known to include various fungi in their diet, as seen in the BBC Weird Nature video below.

Donald Pfister, a biologist who studies fungi at Harvard University, suggests that Siberian tribesmen who ingested fly agaric (amanita muscaria) may have hallucinated into thinking that reindeer were flying.

“At first glance, one thinks it’s ridiculous, but it’s not,” said Carl Ruck, a professor of classics at Boston University. “Whoever heard of reindeer flying? I think it’s becoming general knowledge that Santa is taking a ‘trip’ with his reindeer,” Ruck said.

Controversy Over Linking The Pre-Christian Santa To The Modern Day Version of St. Nick

As convincing as the theory may be, many historians and anthropologists disagree with the Amanita shamanic version of Santa Claus, and claim that our current depiction of the jolly old man has in fact evolved from a 4th century Greek-Christian bishop named Saint Nicholas, who was known for his generous gifts to the poor.

A 13th-century depiction of St. Nicholas.

Then, in 1823, a New York City aristocratic academic by the name of Clement Clarke Moore wrote the infamous poem, “A Visit From St. Nicholas” (which later became “Twas The Night Before Christmas“), which was thought to have been inspired by the Christian bishop, and which envisioned an entirely new portrayal of St. Nick.  Throughout the next few centuries, the image of Santa Claus became ubiquitous throughout Western culture, and was re-sculpted and refined by clever marketing organizations such as Coca Cola. Hence the fat, bearded character we know today.

But Germanic folklore tells an even different story of the true origins of Santa Claus. Prior to Christianization, the Germanic peoples celebrated a midwinter event called Yule. With the Christianization of Germanic Europe, numerous traditions were absorbed from Yuletide celebrations into modern Christmas. During this period, supernatural and ghostly occurrences were said to increase in frequency, such as the Wild Hunt, a ghostly procession through the sky. The leader of the wild hunt is frequently attested as the god Odin, who bears the Old Norse names Jólnir, meaning “yule figure” and the name Langbarðr, meaning “long-beard.”

An 1886 depiction of the long-bearded Germanic god Odin by Georg von Rosen.

James Arthur wrote that at the very least, Santa’s sleigh and reindeer are references back to various related Northern European mythology. For example, the Norse god Thor (known in German as “Donner”) flew in a chariot drawn by two goats, which have been replaced in the modern retelling by Santa’s reindeer.

So Where Does Santa Really Come From?

The true origins of the pre-Christian Santa are convoluted to say the least, however, one can only consider that the version we see of Santa today is a conglomerate of folklore and mythology from multiple Eurasian cultures of the past. Therein lies the issue of tracing Santa’s true beginnings.

That being said, investigating Santa’s past is amusing at the very least, and I think the shamanic version of the story stands as the most fascinating of all. What are your thoughts on the origins of Santa and his reindeer? Do you think the Amanita muscaria legend could be true? Share with us below!