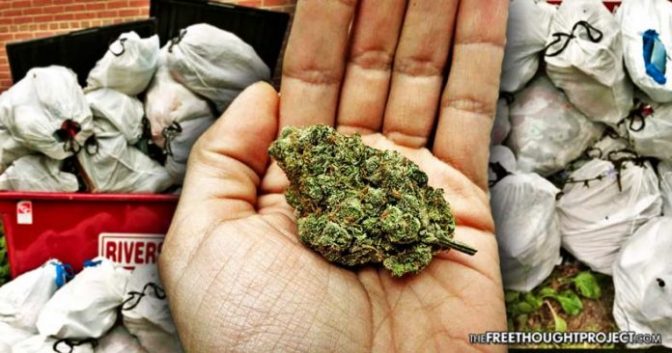 Gardiner, Maine – A cannabis dispensary called Summit Medical Marijuana recently ran a creative promotion that made their community a better place. The dispensary offered free marijuana to anyone who picked up a full bag of trash from around town and brought it into the shop.

“Bring us back the full trash bag, and we give them a gift of cannabis. [I heard of it in] Colorado – there was a town that did this. They had a great response to this. So I was hoping to do the same thing in Maine,” he said.

“Something that caregivers do all across Maine that very few people know about is that they make huge sacrifices every week to help others live a better quality of life,” he added.

Meehan explained that in addition to cleaning up the trash in the community, he wanted to show his neighbors that his business cares about making a difference and that marijuana is not a bad thing.

“It’s profound. The research. There’s a whole world of science out there. If you started the research today, 10 years from now you’d still be doing the research…When you see this plant have an incredibly life changing impact on somebody that has given up on life, or somebody that has been given up on by modern medicine – and you can bring them back to life and give them a quality of life. It doesn’t just affect that patient, it affects every single person in the family,” Meehan explained.

Meehan was able to get away with this promotion because it is currently legal to give marijuana away for free in the state of Maine, which seems to be the policy in many places where medical marijuana is available, or where the plant has been decriminalized.

Summit made a post on their Facebook page announcing that they were planning another day of clean up due to the success of their recent effort, but this time they would include the whole state.

“Mainers rock!!! You’re all amazing people!!! Anyone want to help do this statewide in 1 month or so? Thank you to the providers, and incredible Maine folks for stepping up in a big big way. We came up with the idea from Gardiner days of caring program, and something similar to this in Colorado. Stop by, get your free cannabis. Most beneficial plant known to human health!” the post read.

Immediately after legalization took effect in Colorado, we reported that dispensaries in the state donated large sums of money to have stretches of Denver highways cleaned up. For their donations, the companies had their name placed on signs along the highway, thanking them for their sponsorship.

Also, as the Free Thought Project reported earlier this month, Colorado is showing the good things that happen when people gain freedom and a new industry is born. For the second year in a row, $40 million from taxes on legal pot sales will be going into a program to repair and replace rundown schools.

Hiroshima, Japan is devastated when the atomic bomb “Little Boy” is dropped by the United States B-29 Enola Gay. Around 70,000 people are killed instantly.

According to the Denver Post, this figure funds a significant portion of the $300 million in funding for the Building Excellent Schools Today (BEST) program, along with funding from other sources including the lottery and the Colorado Land Board. Although billions more are needed to completely fix the problem of crumbling schools, officials welcome anything they can get to provide the kids a good school.

After Colorado legalized Marijuana just a few short years ago, the world was finally given some evidence to be able to determine whether or not the propaganda was true. Since prohibition has ended in certain areas of the US, the Free Thought Project began compiling stories that debunk the “reefer madness” propaganda that has infected American culture for nearly a hundred years. Here is a list of debunked claims highlighting how the war on drugs is built on lies.