The Divine Movement: A Marriage Between EDM and The Esoteric 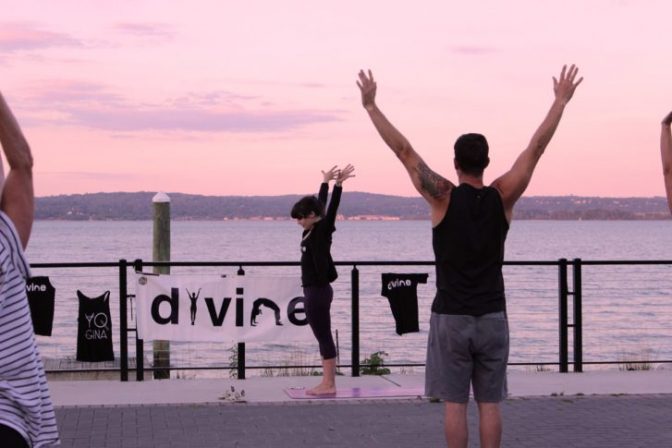 DJ Gina Turner  and Tim Rothschild are two high school friends that synchronously reunited, with the help of some Divine timing.

The two have impressive bios, with multifaceted talents in both the creative and consciousness expanding realms of reality.

Gina Turner is the ultimate multi-hyphenate. Raised in New York City, Gina Turner is a yoga teaching, internationally touring, multi-label releasing DJ, producer, radio host, new mother and label boss. To successfully balance all aspects of her life, Gina was certified with her 300 hr YTT through Yoga Alliance certified Frog Lotus International, with a specific certification in Vinyasa Flow. Gina is also a certified Prenatal Yoga Instructor with a long time passion for Ashtanga and Inyengar Yoga. Falling in love with house and techno music at a young age, Gina would go to legendary clubs like shelter and Soundfactory NYC with her fake IDs . Early on Gina began her career as a radio DJ in Boston. She’s hosted shows on WERS, WECB, Scion Radio, iHeartRadio and currently hosts on Sirius XM’s BPM and Electric Area stations. Throughout the course of her career Gina Turner has released on numerous labels including Ultra Music, Nervous Records, Ministry of Sound, Mixmash Records, Pssst, Defected, Snatch!, Sound Pellegrino and her own self-started imprint Turn It Records. Recently Gina has been named “Best NY DJ” by the celebrated NY publication Village Voice, outshining the other male nominees in the category! After a brief break from touring the globe, with the birth of her first daughter, Gina is now back to her yoga teaching, prodigious producing and club smashing ways. With a string of releases planned for the coming year Gina is back on the road and ready to get back to what she does best, getting the party going and making people dance.

Founder of The Third Thing Network and Co-Founder of The Divine Movement, Tim Rothschild is an explorer of consciousness, dedicating his life to healing work and finding innovative ways to expand the collective human experience. As a Nondual Kabbalistic Healer, Reiki practitioner, Numerologist, Tarot reader, comedian and entertainer, Tim has ventured through the paranormal, conspiratorial, and mystical realms. He uses his experiences playing “psychedelic detective” in order to cleanse the doors of perception, allowing the individual to be in relationship with reality just as it is – kickstarting the process of freedom, enabling them to feel ALIVE again! He is in his 4th year of training at Society Of Souls, and is a practitioner of the MAGI process. He is also co-host of the Deep Inside The Rabbit Hole podcast out of Stand Up NY Comedy Club, host of The Cosmic Perspective, and co-host of Cosmic Perspective News ontalknetwork.com, as well as various other programs. His websites arewww.thethirdthing.net, www.thedivinemovement.com, www.thecosmicperspective.one, andwww.cosmicperspectivenews.com.

The two have joined forces to create The Divine Movement, which is a marriage between EDM and the esoteric. A unique experience which infuses yoga, numerology, dance, and divinity into an unforgettable evening. An extraordinary party with a cosmic consciousness.

We recently attended a Divine Movement event, which was hosted by Casa Hudson in Haverstraw, New York – and were blessed with the opportunity to meditate and do yoga under the light of the Full Moon (see photos below). The event begins with Rothschild guiding the group through a deliciously sublime meditation, then segues into a powerful yoga flow by Turner. Afterwards, Turner starts her set, and the music begins as the portal to the cosmic gate of inner wisdom is piloted by Rothschild.